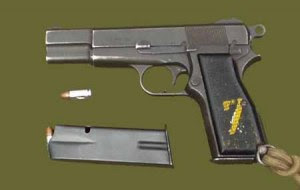 Maryland Heights Police Chief Tom O’Connor says Tuesday’s thefts weren’t the first at the home in the 1900 block of Rule Avenue, “7,62 military ammunition was stolen some time back from the same resident.” O’Connor says that ammunition was taken from the home’s garage about a month ago, but the theft wasn’t reported until after the guns were stolen. O’Connor says it’s possible whoever took the ammunition, came back for the guns, but that’s not been confirmed. In fact, he says, police have no suspects at this time.

The victim was a retired policeman. He failed to report the ammunition theft, which might have alerted the local authorities to the fact that his home was a known target.

I'll bet he didn't have one of these babies either, which would have been well within the budget of the reward now being offered.

In other words, this former law enforcement officer made it easy for the theft to take place. For that he's 100% guilty and should be made to pay.

What's your opinion?  Do you think if a person can afford 70 guns they can afford a safe to keep them in?  Sounds simple doesn't it?

Please leave a comment.
Posted by Unknown at 7:58 AM