The Original Purpose of the Gatling Gun 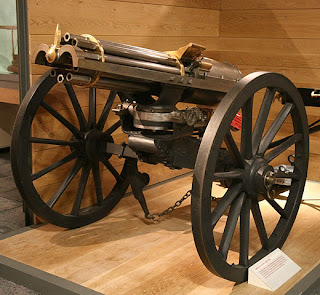 via Dan Lewis of Now You Know

The man's name was Dr. Richard Jordan Gatling, inventor of the Gatling gun, pictured above. After inventing the weapon, Gatling wrote, "It occurred to me that if I could invent a machine – a gun – which could by its rapidity of fire, enable one man to do as much battle duty as a hundred, that it would, to a large extent supersede the necessity of large armies, and consequently, exposure to battle and disease [would] be greatly diminished."