President Obama has been tougher on immigration, as reflected in the expenditure of resources to patrol our borders and in deportations of criminal illegal immigrants.  But as is always the case, one should be careful what you wish for.  Illegal immigrants are one of the biggest ways that the right terrifies its base into support.  Unfortunately, they don't seem fully to realize what happens when they are gone.

From al.com, I'm posting this here because what the right believes about illegal immigrants is too often inacurate myth: 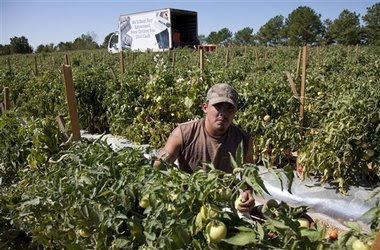 View full sizeJeremy Gonzalez picks tomatoes on a farm in Steele, Ala., Monday, Oct. 3, 2011. Much of the crop is rotting as many of the migrant workers who normally work these fields have moved to other states to find work after Alabama's immigration law took affect last week. The same problems are occurring in Georgia, its agriculture commissioner reported to US lawmakers on Tuesday, Oct. 4, 201. (AP Photo/Dave Martin)
ATLANTA — A farm labor shortage that left crops rotting in the fields after Georgia passed a law cracking down on illegal immigration shows the need for a retooled or expanded guest worker program for migrant laborers, Georgia's agriculture commissioner told a panel of Washington lawmakers Tuesday.
Commissioner Gary Black testified at a Senate subcommittee hearing on immigration enforcement and farm labor that an informal survey showed farmers of onions, watermelons and other handpicked crops lacked more than 11,000 workers during their spring and summer harvest. Farmers say that's because the Georgia immigration law scared off many migrant workers. Similar complaints are being heard in Alabama with its tough new law.
Financial incentives aimed at getting unemployed Georgians and even criminals on probation to take their place picking crops were marginally successful, Black said, because the new workers were too slow and often quit because of the strenuous labor involved.
"A robust agricultural guest worker program, properly designed, will not displace American workers," Black said in remarks prepared for the hearing. "As my testimony shows, in Georgia, even with current high unemployment rates, it is difficult for farmers to fill their labor needs."
Black said it's still unclear how much the labor shortage will ultimately cost farmers. But one group says growers have already lost tens of millions of dollars.
Charles Hall, director of the Georgia Fruit and Vegetable Growers Association, released figures from an upcoming industry-funded study Tuesday that says farmers lost at least $74.9 million in unpicked crops harvested by hand last spring and summer because they didn't have enough labor. The farmers said they lacked 40 percent of the total work force they needed.
The numbers come from self-reported surveys completed by 189 farmers of onions, watermelons, bell peppers, cucumbers, squash, blueberries and blackberries, said John McKissick, director of the University of Georgia Center for Agribusiness and Economic Development, which is compiling the report.
It's a snapshot of just a small fraction of Georgia's farmers overall. The surveyed farmers hold just short of half the state's overall acreage for those seven crops.
And the seven crops examined in the study accounted for just 5 percent of Georgia's $11.3 billion in farm products from 2009, according to the agribusiness center's last annual report.
The growers association reported other figures estimating even broader economic losses, based on the $74.9 million figure, but McKissick said those numbers were not scientifically derived.
Posted by dog gone at 3:54 PM