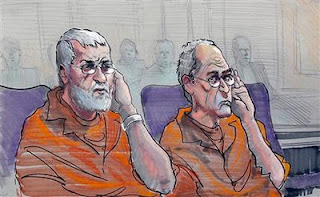 To the left is an artist's rendition of two of the conspirators plotting to exterminate the populations of Washington, DC, Atlanta, New Orleans, and maybe Jacksonville.  To the far left, is (Emory) Dan Roberts, age 67--codename: Cobra.  Seated beside him is the ringleader--Frederick Thomas, age 73.  They are holding their hands cupped to their ears because this elite team of gunloons are, well, a bit hard of hearing. 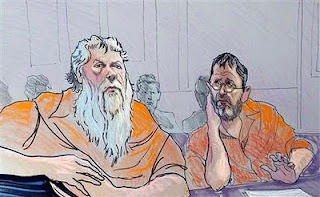 This team of America's Finest Warriors are adherents of fellow Super-Aryan Mike Vanderboegh whose combat exploits and derring-do is legendary, particularly among the mobility scooter set collecting disability checks crowd.

These are the cream-of-the-crop, elite "three-percenters."  These are the final bulwark between us and Kenyan socialism-Sharia Law-Designated Hitter-Blacks in Our Restrooms.

Frederick Thomas:  Meeting with an undercover FBI agent, Thomas allegedly explained that his “covert group” wasplanning to carry out the actions of the main characters from the book “Absolved,” written by right-wing blogger and former militia man Mike Vanderboegh. He allegedly said he considered himself expendable because of his age.

(Emory) Dan Roberts: As TPM previously reported, Roberts sued a number of local officials and a newspaper in federal court in relation to a 2004 “Southern Heritage” event he organized at a middle school that featured the Confederate flag. According to the lawsuit, he “co-sponsored and assisted in flag rallies organized by the Southern Rights Association [hereafter SRA]. He is widely known in the area as a flag supporter.”

Ray  Adams: A retired Department of Agriculture employee, Adams lives in “a single story shelter constructed of wood plants and a metal roof.” The rear of the shelter, according to an FBI affidavit, “is a travel trailer used for its kitchen facilities and storage.” It’s located on 17.21 acres.

Samuel J. Crump:   Crump, pictured above in a photo posted on MySpace and Facebook, lived in a mobile that sat on .27 acres. The Centers for Disease Control told the FBI he worked as a contractor for the agency doing “maintenance type services.”

Ladies and Gents, I give you the NRA's finest. Their elite.
Posted by Jadegold at 11:54 PM