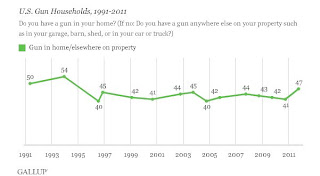 This is the Gallup Poll everyone is making such a big deal about.

Sebastian said, "that Gallup poll is bad news for gun control advocates, and everyone knows it."

What's that supposed to mean? The Gallup folks themselves gave a more-than-adequate explanation.

the latest increase in self-reported gun ownership could reflect a change in Americans' comfort with publicly stating that they have a gun as much as it reflects a real uptick in gun ownership.

My first thought was what's the big deal. Those look like minor fluctuations.

What do you think? Please leave a comment.
Posted by Unknown at 8:24 AM