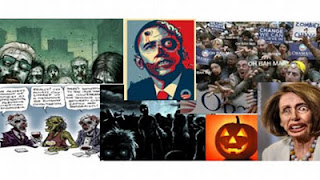 
A Halloween-themed email from the Loudoun County, Va., Republican Committee was swiftly condemned by conservative and liberal groups today for featuring an image of a ghoulish-looking President Obama with a bullet hole through his head.The message, with the subject line “Halloween 2011,” invites supporters to a community parade where “we are going to vanquish the zombies with clear thinking conservative principles and a truckload of Republican candy.”  It also features a caricature of House Minority Leader Nancy Pelosi, a jack-o-lantern, and cartoons of zombies.

Missing from the news story are facts about Mark Sell.


Mark Sell works as an electronic communciations specialist for the NRA. He has been active with the Loudoun County Republican Party for nearly a decade, fighting for conservative values. He has served the committee in many capacities, including LCRC Treasurer, Convention and Mass Meeting Rules Committee Chairman, and District Chairman. He has volunteered for many Republican candidates, including serving as a Volunteer Coordinator for the victorious "Cuccinelli for Attorney General Campaign." Mark has the grassroots experience we need for furthering the efforts of the Loudoun County Republican Committee to elect conservative candidates.