Since Greg has this bizarre idea that a gun would stop a well armed foe, here's a picture of Ypres in West Flanders Belgium during one of the Three battles that raged through the Town during the 14-18 War. Not only was heavy artillery used, but so was poison gas. The third Battle is also known as the Battle of Passchendaele. 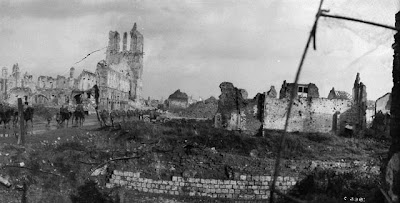 You can correct grammar, Greg, but you know little else.
Posted by Laci The Dog at 7:58 PM