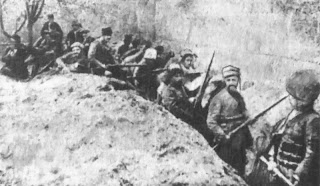 Now, the great Scholar Joe the Plumber has decided to parrot the nonsense about "Gun Control caused Genocide", but Matthew White doesn't get into the topic in his debunking of the nonsense. He does cover the topic, but doesn't mention how many people were killed by gun control

Matthew does say that the big massacres occurred in 1915, but there were rumblings before and after...with the period of 1915-18 generally included in the Death Tolls for World War One.

I am going to toss in that this one not only works on US historical ignorance, but also its ignorance of other countries. Armenia was in the South Caucasus region between Turkey and The Russian empire. When World War I broke out, the confrontation of the Ottoman Empire and the Russian Empire in the Caucasus and Persian Campaigns let to the Turkish government fearing the Armenians and viewing them with suspicion: especially since the Russian army contained a contingent of Armenian volunteers.

So, I get the feeling that gun control once again had little to do with the death toll in this genocide since the picture to this post is captioned:

Armenians defending the walls of Van in the spring of 1915. Scanned from the Soviet Armenian Encyclopedia Article on the Defense of Van (vol. 11, p. 273)

Somebody needs to tell those Armenians that they shouldn't have guns!

In fact, the defenders of Van were able to resist the Turks for over a month.

Also, it appears that the bulk of this genocide happened during the period of World War One. So, while the Armenians were being persecuted by the Turks and Kurds, they were allied with the Russians. In fact, it was the allegation of an alliance with the Russians which was used as a justification for the genocide.

This is what History.com says about the Genocide:


On April 24, 1915, the Armenian genocide began. That day, the Turkish government arrested and executed several hundred Armenian intellectuals. After that, ordinary Armenians were turned out of their homes and sent on death marches through the Mesopotamian desert without food or water. Frequently, the marchers were stripped naked and forced to walk under the scorching sun until they dropped dead. People who stopped to rest were shot.

At the same time, the Young Turks created a “Special Organization,” which in turn organized “killing squads” or “butcher battalions” to carry out, as one officer put it, “the liquidation of the Christian elements.” These killing squads were often made up of murderers and other ex-convicts. They drowned people in rivers, threw them off cliffs, crucified them and burned them alive. In short order, the Turkish countryside was littered with Armenian corpses.

Records show that during this “Turkification”campaign government squads also kidnapped children, converted them to Islam and gave them to Turkish families. In some places, they raped women and forced them to join Turkish “harems” or serve as slaves. Muslim families moved into the homes of deported Armenians and seized their property.

In 1922, when the genocide was over, there were just 388,000 Armenians remaining in the Ottoman Empire.

There are quite a few problems with alleging that "gun control causes genocides" especially if the genocide occurs in war time. In this case, while the Armenians were being attacked by the Turks and Kurds, we don't know how much support they received from the Russians. Secondly, the argument presupposes that firearms are commonly owned items, we don't know how many Armenians actually owned firearms prior to the genocide and "gun control".

Of course, it garners sympathy to say that the Armenians were defenceless. They lose sympathy if it comes out that they actually were well armed and resisted the Turks.

But, like most of these genocides, it seems that any evidence either way is hard to find. Although, it seems that, like the Holocaust, there was resistance. It wasn't "gun control" that provided the potential for the Armenian genocide as much as the fact that it was an ethnic population caught between two warring empires.

This is not to say the genocide didn't happen or justify it, but that the claim that "gun control cause the Armenian Genocide" is yet another attempt to use one people's suffering for political gain at the cost of history.
Posted by Laci The Dog at 1:42 PM