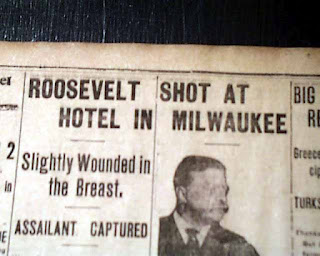 If I were going to think of an internet identity which would show bad taste and general ignorance for a pro-gunner, I could come up with some obvious ones relating to Lincoln, Garfield, McKinley, JFK, or Reagan.

Using Teddy Roosevelt comes in there as well (and ties into McKinley). In fact, Roosevelt might be a better (worse?) choice for someone who is advocating "pro-gun" policies.

First off, TR became President due to McKinley's assassination in 1901

Secondly, TR survived an assassination attempt on 14 October 1912 when:

John F. Schrank, a saloon-keeper from New York, shot Roosevelt once with a .38 caliber revolver. A 50-page speech folded over twice in Roosevelt's breast pocket and a metal glasses case slowed the bullet. Amidst the commotion, Roosevelt yelled out, "Quiet! I've been shot." Roosevelt insisted on giving his speech with the bullet still lodged inside him. During his speech Roosevelt stated, "It takes more than one bullet to bring down a Bull Moose" thus further perpetuating Roosevelt's image as a larger than life President and the nickname of the Progressive Party, the Bull Moose Party established in June 1912 after Roosevelt responded to reporters questioning his health stating, "I am as strong as a Bull Moose". He later went to the hospital, but the bullet was never removed. Roosevelt, remembering that William McKinley died after operations to remove his bullet, chose to have his remain. The bullet remained in his body until his death in 1919. Schrank said that McKinley's ghost had told him to avenge his assassination. Schrank was found legally insane and was institutionalized until his death in 1943.

And if you don't like "Libruls", don't idolise TR:

Roosevelt attempted to move the Republican Party (GOP) toward Progressivism (AKA Liberalism), including trust busting and increased regulation of businesses. Roosevelt coined the phrase "Square Deal" to describe his domestic agenda, emphasizing that the average citizen would get a fair share under his policies. As an outdoorsman and naturalist, he promoted the conservation movement.
Posted by Laci The Dog at 3:16 PM