When I first kicked around writing about this topic -- I didn't know why we voted on Tuesday either. But I like history, I had heard of this bill and this movement, so I became curious. Blogging is where you all get to see the outcome of what makes me curious. But this video is a better explanation than anything I could write:

There is an organization that intrigued me, mentioned in the above video, Why Tuesday. I am very proud that Minnesota has such a consistently good voter turnout, relative to other states - we are usually in the top couple of states, along with Wisconsin for voter turnout.
I have participated in get out the vote efforts, in phone banks, calling people to remind them to vote, to encourage them to vote, to help them find where they should vote. And by 'where they should vote', I mean where they REALLY should vote, not like Republican efforts to suppress voter participation. FYI, I have done that for all voters whom I have spoken with, not just those voting for a candidate I support. I think this gives me the moral high ground over conservatives who use every means possible to suppress voter participation for other candidates, by calculated bad legal means and outright illegal means.
For this post, I looked up our turnout for recent elections.  In 2008, it was 77.8% per the Humphrey School of Public Affairs.  I won't post the excerpt, because it runs long, but it addresses our region as well as our state, and I encourage readers to follow this link to it.  It notes reasons for why we are typically the highest voting turnout state, including our same day registration laws -- the kinds of laws that conservatives want to gut.

In 2010, we were still the state with the highest voter turnout in the nation, at 55.4% of eligible voters, per this City Pages report, which noted the National Average was 40.3%.  Only 32% of  New Yorkers voted.  The Council of State Governments web site had a more in depth analysis of voting patterns - voting patterns our Republican government wants to change - and not for the better:

For policymakers looking to improve voter turnout, no state offers a better model than Minnesota.
At least so says George Mason University professor Michael McDonald in a paper examining the 2010 midterm elections and historical voter turnout data.
“Make it easy for people to vote, educate your citizenry and hold interesting elections,” McDonald writes. Using that formula, Minnesota had a turnout rate of 55.5 percent, highest in the nation.
McDonald calculates the rate by dividing the number of votes cast for highest office by the total voting-eligible population. Eight other U.S. states had turnout rates in 2010 of 50 percent or more, including Iowa, South Dakota and Wisconsin. North Dakota had the region’s fifth-highest rate.
With the exception of South Dakota, McDonald notes, these five Midwestern states have at least one thing in common: they allow Election Day registration. (Only nine U.S. states permit it, and they all fall above the national median for turnout.)
High-turnout states also tend to have larger percentages of residents who have at least attended some college classes. There is some evidence, too, that the use of mail ballots has a positive effect.
“The two states that conduct all-mail ballot elections — Oregon and Washington — are in the top five,” McDonald writes.

The group Why Tuesday had this interesting information, comparing us - a nation that prides itself on being a democracy, the first national democracy, a model for world wide democracy.  OUR voter turnout rates are embarrassing, in contrast to other democracies in the world. 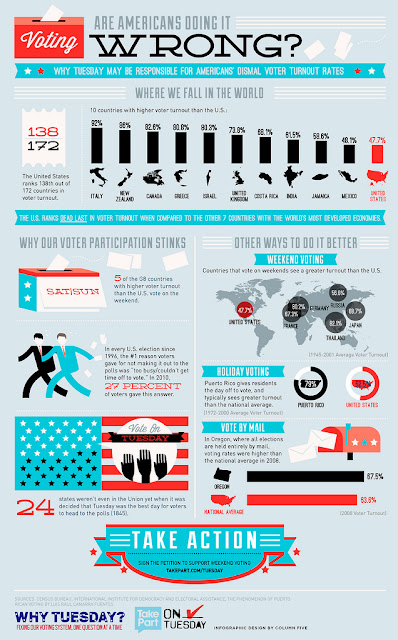 Our last national election, Minnesota was number 1; we turned out fewer voters than Jamaica turns out.
Instead of trying to make it harder to vote, instead of wasting $18,000 of tax payer's money on defending a very poor Voter ID Amendment that should never have been passed in the first place because it is a bad, big government over-reach solution to a non-problem -- the much ballyhooed voter fraud in the Franken /Coleman hotly contested election for example, was one guy  WHO VOTED FOR the Republican candidate COLEMAN  -- we should have a bi-partisan effort to support weekend elections, and getting more legal voters out to the polls to vote.
from the PiPress:


The Legislative  Coordinating Commission, acting on behalf of the Legislature,
voted Thursday to hire an outside law firm to file a motion to intervene in the
case. The cost is $18,000.

What, they haven't spent enough tax payer money on outside legal representation with the $50k to defend against their own little horror, the poster boy for delusions of entitlement, Michael Brodkorb?
We should be finding ways to encourage legal voters to participate, we should be searching for common sense solutions to bring UP our voter participation rate, not make it even lower -- it is too low as it is.  And we should be spending more money to have an educated electorate, statewide and nationwide.  Instead our Republican legislature looks for more ways to engage in corrupt partisan politics that waste tax payer money, that would be far more costly to implement.
Don't take my word for it; there are many sources that have examined how much more costly elections become with voter ID.  The most comprehensive study that I could find can be downloaded for free here as a standard pdf.
The Cost of Voter ID Laws: What the Courts Say
Publications

– 02/17/11
Based on a comprehensive review of every court case in which a photo ID law has been challenged, this paper examines of the costs states must incur if they decide to implement photo ID requirements for voters.

In a difficult fiscal environment, citizens may reasonably question whether there are more pressing needs on which to spend their tax dollars than photo ID rules, and state legislators should seriously consider whether photo ID laws are worth their considerable costs. In doing so, legislators should consider the myriad other measures already in place in their states to guard against voter fraud—which have been very effective at deterring such fraud —as well as less expensive measures to increase the security of elections, including voter ID laws that allow voters who do not have photo ID to demonstrate their identities at the polls by other means. Legislators who still wish to pursue photo ID requirements for voting must ensure that the laws provide for free photo IDs, ensure that IDs are reasonably accessible to all eligible voters, and include sufficient voter education and outreach programs and poll worker training.

We should be looking at the potential benefits to switching to weekend voting - like so many other nations in the world, including those voting on Sunday, June 17, 2012.  We should not be reducing our already low voter participation by voter suppression measures, like voter ID, reduced early voting, more stringent and restrictive absentee / mail in ballots, and eliminating same day voter registration. 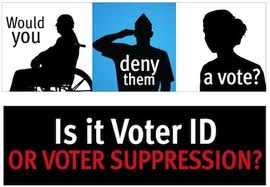 Our voter participation is already TOO low.  Don't make it harder for legal voters to vote; don't support voter ID. Support instead a change from silly Tuesday voting to weekend voting.  Either we are the leading democracy in the world, or we aren't.  If we are going to give lip service to patriotism about freedom and liberty - vote, and do whatever it takes to encourage everyone else to vote as well, and to be informed and educated voters.  That might mean ending Tuesday voting.  It definitely means ending Voter ID laws  and bad voter roll purges.