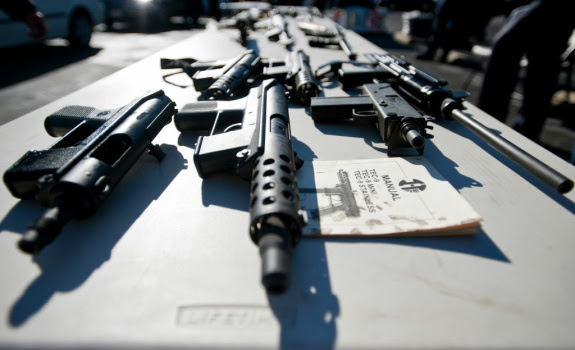 TEC-9 handguns, pictured above, were recovered in Los Angeles at a recent gun buyback organized by the LAPD. A new poll suggests that 75 percent of Latinos and 62 percent of black people worry about becoming a victim of gun violence.

One in five Americans knows a victim of gun violence, according to a new survey, and 42 percent worry about becoming one.

That's according to a new Kaiser Health Tracking Poll, which added that among survey respondents who said they knew a victim, more than 60 percent said that victim was a family member, good friend – or that they themselves were the victim.
Among the groups most likely to know a victim of gun violence:

This is why the gun-rights movement is doomed to fail. Every year there are 100,000 victims of gun violence. The friends and relatives number in the millions. The majority of them agree with the gun control argument, especially the most reasonable suggestions like background checks and the assault weapons ban.

Over the next five or ten years the balance will tip more and more in favor of gun control.

What's your opinion?  Please leave a comment.
Posted by Unknown at 11:28 AM