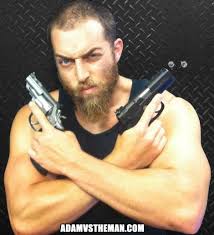 Adam Kokesh, a liberterian activist who was convicted of drug and gun charges Thursday in a Fairfax County, Va., court, did not contest the allegations, but he called the raid that led to his arrest “political persecution.”
Kokesh, 32, entered an Alford plea in Circuit Court to two felonies related to his possession of hallucinogenic mushrooms while possessing a gun. In an Alford plea, a defendant does not admit guilt but acknowledges that prosecutors have enough

evidence to obtain a conviction.
Kokesh faces a maximum of 15 years in prison when he is sentenced Sept. 5.
Kokesh unsuccessfully ran for the Republican nomination for New Mexico’s 3rd Congressional District in 2010, a seat now held by U.S. Rep. Ben Ray Luján, a Democrat. He grew up in Santa Fe, the son of Marla and Charles Kokesh. The elder Kokesh was a California venture capitalist who moved to Santa Fe in the 1990s to buy the Santa Fe Horse Park but ran into financial misfortunes, including foreclosures on the horse park and his home

, and federal charges of misappropriating investor funds.
Adam Kokesh was arrested in July, when federal and local authorities raided the Virginia

home he shared with other activists.

10 guns and drugs, including LSD, marijuana, cocaine, ecstasy and mushrooms.
Posted by Unknown at 9:53 AM