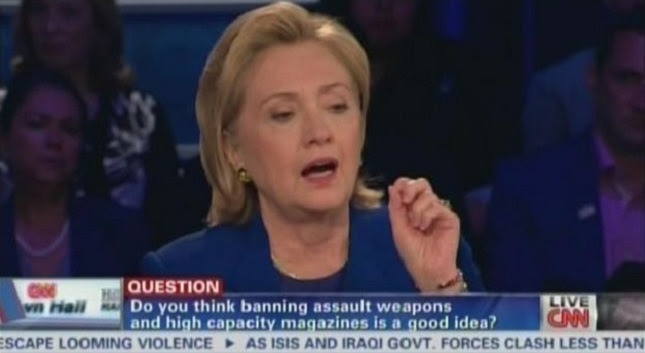 
CNN host S.E. Cupp baselessly suggested that Hillary Clinton's support for a ban on assault weapons is bad politics by promoting the myth that the 1994 Republican takeover of the House of Representatives was fueled by the passage of an assault weapons ban that year.

In fact, political scientists say tax increases and a fight over healthcare reform better explain the Republican takeover. But conservative pundits often incorporate the 1994 assault weapons ban into the media myth that it is politically unwise for politicians to support gun reform and that the National Rifle Association has the ability to use the gun issue to determine election outcomes.

During a June 17 town hall forum on CNN, Clinton expressed support for a ban on assault weapons and high-capacity ammunition magazines, as well as expanded background checks on gun sales. On the gun debate, Clinton added, "we need a more thoughtful conversation, we cannot let a minority of people ... hold a viewpoint that terrorizes the majority of people."

Appearing on CNN's The Situation Room after the town hall discussion, Cupp suggested political danger in Clinton's position, stating, "Democrats really suffered, and Hillary Clinton knows this, Democrats really suffered the last time they enacted an assault weapon ban. There were a lot of Democrats who were thrown out of office the last time that passed."
In a January 17, 2013, US News article headlined "Gun Control Laws Weren't Primary Reason Dems Lost in 1994" political scientists and 1994 election experts Philip Klinkner and Gary Jacobson are quoted arguing that assault weapons ban legislation was only one of several controversial votes leading up to the midterm elections but that a "mythology" was formed around the gun vote. Klinkner and Jacobson instead pinned the electoral success of the Republican Party on the failure of health care reform and tax increases:

While the '94 election proved Americans wanted Democrats out of congressional power (more than 50 Democratic seats were lost), it's less clear if the weapons ban, or any one issue, was the primary reason for their loss.
"This is a mythology that has developed," says Philip Klinkner, who edited a book about the '94 elections. "That narrative stretches things way too far."
The truth, political scientists say, is that it can be attributed to a combination of factors, and the "assault weapons" ban was just one of several controversial votes that led to the loss.
With Democrats in charge of the House, Senate and White House, the 103rd Congress tackled a long, progressive wish list. The White House pressured legislators to take on healthcare reform (unsuccessfully), pass the North American Free Trade Agreement and raise taxes through a deficit reduction act, which was fraught with political land mines for congressional Democrats. None of the policies helped earn legislators points back home among their more conservative constituents.
"The vote for gun control mattered, but the vote for the tax increase and healthcare were more important," says Gary Jacobson, who has done a statistical analysis of what votes affected the outcome of the 1994 election.