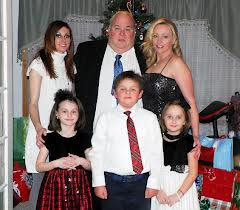 A man who had recently separated from his wife shot his two children, killing his 7-year-old daughter, before committing suicide, prosecutors said.

No restraining orders had been filed against Daryl Benway, and he had no criminal record, the DA said. He had a gun license that expired in 1999, Early said.

What's that supposed to mean, his gun license expired? What happens in Mass. when gun licenses expire? Do the authorities suppose those men turn in their guns?

Should extreme obesity be a restricting factor in gun ownership? Just look at that photo. He's the kind of guy who gets out of breath just standing up to take a family picture. Is someone like that capable of handling a gun responsibly?

Does the mental illness which leads to the kind of lifestyle in which extreme obesity can set in impair one's ability own and manage guns?

The policy of "may issue" is the answer. In many cases, the local authorities can make a judgment call about these issues. Of course, I'm not just talking about concealed carry permits. "May issue" should apply to gun ownership as well.

What's your opinion? Please leave a comment.
Posted by Unknown at 11:06 AM