Linoge always seems to be on the losing end of thing: 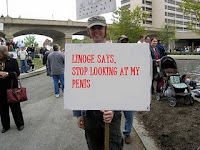 (CNN) -- A decreasing number of American gun owners own two-thirds of the nation's guns and as many as one-third of the guns on the planet -- even though they account for less than 1% of the world's population, according to a CNN analysis of gun ownership data.
The data, collected by the Injury Prevention Journal, the United Nations Office on Drugs and Crime, the General Social Survey and population figures from the U.S. Census Bureau, found that the number of U.S. households with guns has declined, but current gun owners are gathering more guns.

I suspect Jonathan Clark Sullivan will give up his guns when (if) his testicles drop.
Posted by Jadegold at 12:12 AM