Breaking Up is hard to do

Just to remind you, there is actually a world out there: Scotland will soon be voting on independence in another two days.

This is something I have a personal stake in and my opinion is "no".

This is an opinion based upon history and the politics of what will happen if Scotland does go independent.

While some people may look at this with a romantic eye, the reality is much harsher than people outside the UK realise.  Well, maybe the CIA does realise it, which makes me think they will have a hand in this.

First off, an independent Scotland will be very liberal.  Liberal to the point of becoming a nuclear free zone and kicking the Trident fleet out of the Clyde, which will not please the US.  Additionally, it will drain NATO of Scotland's military.  That will also bugger England's nuclear capability as they look for another place for the Trident fleet or an alternative to Trident.

If I were a Euroskeptic, this would be a godsend, as a newly independent Scotland will have to apply for membership in the European Union.

If I were conservative, this is a godsend for British Tories as Scotland is a very lefty state.  The Scottish Green Party is one of the sponsors of this referendum.

John Oliver gives a good summary of what is at stake, although I have not watched all of this video.

Americans tend to look at independence with a very romantic eye and fail to see the actual political  implications (well, except for those in the "elite" who see the issues quite plainly).

I'm surprised that someone I know who is a Scottish Historian, Neil Oliver, hasn't weighed in on this, but he did retweet this post: 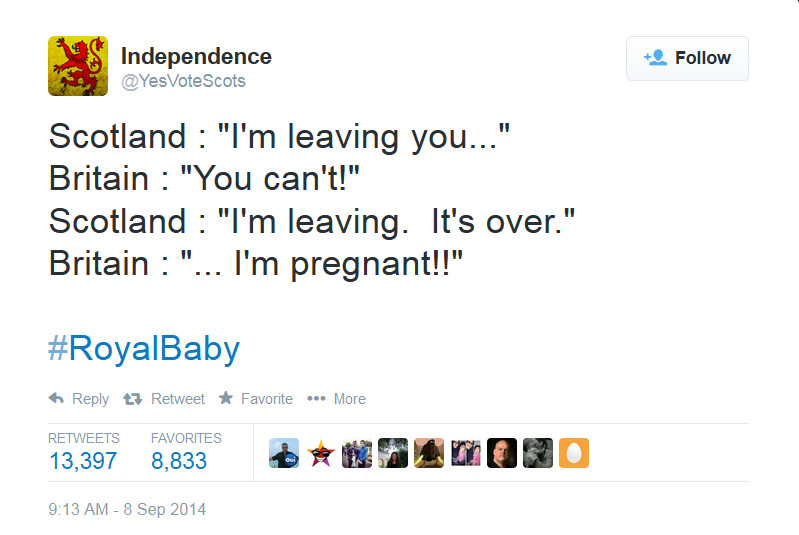 Yeah, John Oliver did point out that the pro-Union side sounds like an impending divorce. In some ways, this is like a rocky marriage, with the alternative being worse than staying together.  Neither is totally happy with the other.

I did watch three serious programmes about the referendum:  Robert Peston's Scotland: for Richer or Poorer?, Andrew Neil's Scotland Votes, and Allan  Little's Panorama piece Scotland's Decision. They all pretty much confirmed my fear that this will be a bad point for the UK.  Although, this may be the apogee of the Scottish Independence movement.

Or something which people end up regretting if it does pass and the economic ramifications are as bad as predicted.

Scotland and England do have a degree of separation in that there is a slightly different currency (although lord knows what will happen if the Scottish pound breaks from the British Pound).  Scotland also has a different legal system from England and Wales.

Personally, I look at it from my perspective as a Jacobite.  The King across the water is no longer a viable option, despite the romantic images of the rebellions.  Those images are romanticising something which was seriously awful with people being hanged, drawn,and quartered; heads placed on the York City wall, and the driving of many people to a horrible land: North America.

The reality was that Union was born of necessity as Scotland plunged into a serious depression.

Like it or not, the UK is much better together.  The day after separation will be far more of a nightmare than the marriage.
Posted by Laci The Dog at 7:13 AM