The power of Art:

The DC Graphic Novel Batman: Seduction of the Gun, by John Ostrander and Vice Giarrano is said to be the impetus for Virginia passing its one gun amonth bill in the 1990s. The novel was written after an adult son of one of the Warner Brothers executives who worked with DC Comics was senselessly murdered in 1990.

The comic talks about a gun runner who goes to Virginia to bring guns back to Gotham City. Batman masquerades as a gun dealer while Robin enrolls in an inner-city high to protect the dealer’s daughter from gang reprisal. This picture is where Robin is talking to the other non-gang affiliated kids at the School. 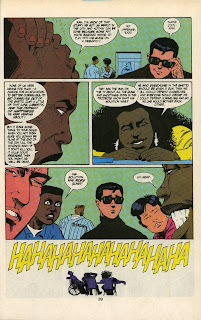 I have to admit I wonder if this is where Fat White Man got his nom de plume as a dig at the sentiment expressed in the comic.