For the Semper Paratus Crowd

via Before It's News Three items you can use when the SHTF.

If you’re on the run or bugging out, you can use it for breaching obstacles, gaining entrance to a door or even getting out of a trapped car.
I have mine wrapped in 550 paracord and it’s a beast of a self dense tool as both ends are brutally sharp and will seriously jack someone up!

As controversial as it may seem to some, you want to be able to escape from handcuffs if you need to.
I use the one from Magna Light and I’ve sewn my pants tag partially closed so it creates a snug pocket to hide this key.
If you’re ever handcuffed behind your back (as in say a home invasion, hostage situation, etc.), you can easily get the key and unlock yourself or hand it off to someone else to unlock you. 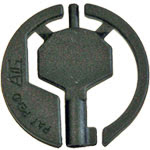 The thing about thugs is that they know that the stakes are much higher if they attack a police officer.
Now, I’m not saying to impersonate an officer, but let’s say you get trapped in a riot as a result of a demonstration that went horribly wrong.
Assuming that police aren’t the target of the demonstrators, having a badge that looks like an officer’s badge could ward off attackers who think you’re just another easy mark as they rampage through the area.
You just take out the badge and tell them to “Back off! Just go your way and I’ll go mine and neither of us need to make this an issue. Got it?” and then back out to safety as you assume their agreement. 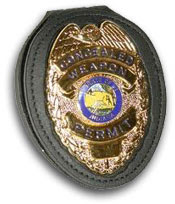 If that still leaves you with any doubt about the author's level of obsessive paranoia, get a load of this.

In fact, I actually carry 29 URBAN SURVIVAL RESPONSE ITEMS on me at all times!

What do you think? Is that normal? Is it me?

I realize people have been caught up in tricky situations, but how likely is it really. This kind of thinking is even worse than the concealed-carry justification. Maybe this guy is in the Robert Farago category. He preaches the need for home carry so you never have to have a foot race to your gun safe with the bad guys.

What's your opinion?  Please leave a comment.
Posted by Unknown at 8:27 AM