How to turn recession into depression.

A new IMF report finds that austerity is only the answer if the question is “How can we reduce income, raise long-term unemployment, and make the recession even more painful for everyone?” Of course, that isn't stopping the Republicans, especially the Tea Party Crowd, from proposing more cuts!

The belief that cutting spending in the face of high unemployment would actually create jobs has been shown to be delusional, if that isn't apparent from the way the economy has been slowly declining for the past 30 odd years. A record 46.2 million Americans are now below the poverty line, the Census Bureau reported yesterday, and the numbers appear to be growing. 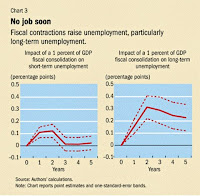 The reduction in incomes from fiscal consolidations is even larger if central banks do not or cannot blunt some of the pain through a monetary policy stimulus. The fall in interest rates associated with monetary stimulus supports investment and consumption, and the concomitant depreciation of the currency boosts net exports. Ireland in 1987 and Finland and Italy in 1992 are examples of countries that undertook fiscal consolidations, but where large depreciations of the currency helped provide a boost to net exports.

Unfortunately, these pain relievers are not easy to come by in today’s environment. In many economies, central banks can provide only a limited monetary stimulus because policy interest rates are already near zero (see “Unconventional Behavior” in this issue of F&D). Moreover, if many countries carry out fiscal austerity at the same time, the reduction in incomes in each country is likely to be greater, since not all countries can reduce the value of their currency and increase net exports at the same time.

Simulations of the IMF’s large-scale models suggest that the reduction in incomes may be more than twice as large as that shown in Chart 2 when central banks cannot cut interest rates and when many countries are carrying out consolidations at the same time. These simulations thus suggest that fiscal consolidation is now likely to be more contractionary (that is, to reduce short-run income more) than was the case in past episodes.

On the other hand, Economic equality equals happiness. So suggests a new study to be published in a forthcoming issue of Psychological Science. In order for Americans to be truly blissed out, it finds, we need to close the gap between our wealthiest and poorest citizens.

The study, lead by Shigehiro Oishi of the University of Virginia, took into account economic and psychological factors when examining data taken from 50,000 individuals between 1972 and 2008. Not surprisingly it was the lower-income participants—those in the bottom 40 percent of the U.S. population—who expressed reduced happiness during periods of greater economic disparity, but their reasons for dissatisfaction were unexpected. Expains Sobczak:

People weren’t unhappy just because their income was lower. Instead, the authors’ analysis revealed that greater inequality was linked to reductions in trust and perceived fairness—and it was drops in those attitudes that made people feel less happy.... Oishi and his colleagues argue that their results may explain why economic growth has not been accompanied by increases in happiness in the United States, unlike in other developed nations. The problem, they suggest, is that gains in national wealth in the U.S. haven’t been distributed equally, and this inequality has caused Americans’ happiness to suffer.

Oishi offers this formula to fix our happiness dilemma: “If the ultimate goal of society is to make its citizens happy, then it is desirable to consider policies that produce more income equality, fairness, and general trust.”

Of course, we can keep going down the road to ruin. The Republicans have shown that they don't mind trashing the economy by creating fake crises over the deficit and debt ceiling. The problem is that Obama has been caving in to the right and not proposing any real world solutions to this problem. People voted for change with Obama, not more of the same.