You use too many big words!!!

OMG, this really was a comment someone made about my posts.

Yes, and some of them are really big ones too!

I will try to make my sentences shorter and use simpler language, but that will be a struggle. Maybe I should add more pictures. Stupid people like picture books.

In fact, in countries with low literacy rates, they put the pictures of the contents on products.

When Gerber started selling baby food in Africa, they used the same packaging as in the US, with the beautiful Caucasian baby on the label. Later they learned that in Africa, companies routinely put pictures on the label of what’s inside, since most people can’t read. the mostly uneducated consumers thought the jars contained ground-up babies. Needless to say, sales were terrible!

That puts this picture in a different light since perhaps this baby is showing fear at being ground up and stuck in a jar. More baby oil please!

I was told I was born speaking complete sentences. So, I said, “the task of discovering the meaning of my writing must be made difficult, for only the difficult inspires the noble-hearted” instead of saying “da-da”, “ma-ma”, or “doug-doug” when I was an infant. Although I do admit to regressing in speech patterns as I have aged.

I am truly overeducated with useless knowledge and the desire to learn has never left me. Like Chaucer’s Clerke of Oxenford “Gladly would he learn and gladly would he teach”. I also will read pretty much whatever is put in front of me.

Someone said he thought I wasn’t as smart as I thought I was. Sorry, but I don’t see myself as smart, although others tell me I am. In fact, that intended insult was more of a compliment and the person who made it lacked the smarts to realise that. I also find through dealings with others that I am a lot smarter than they are since it is amazing how people can find simple concepts difficult to grasp. In particular some moron who wants to put you down by telling you that you aren’t that smart and then showing that he has no idea of what you are talking about. 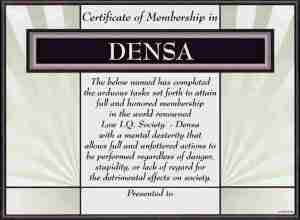 I’ve been told I have a genius IQ more than once (and seem even smarter after correcting that typo).

I don’t belong to MENSA though, but I do belong to DENSA.

Seriously, I try not to be a wanker about it, but it’s kind of hard.

Not to mention very lonely being over-educated and literate.