Pride and Prejudice...and THE MILITIA!

Yeah, we're talking the Jane Austin Pride and Prejudice where the Bennet girls become friendly with militia officers stationed in the nearby town. The militia is leaving town, which makes the younger, rather man-crazy Bennet girls distraught. Lydia manages to obtain permission from her father to spend the summer with an old colonel in Brighton, where one of the officer's regiment will be stationed.

The subplot of the militia in Pride and Prejudice is a constant throughout the novel. Though 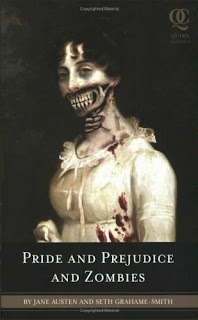 members of the militia were only required to train for twenty eight days of the year, they were often thought to be superior patriots and were generally held in high regard. The militia served as Britain's standing army of reserve troops; during the the late Georgian and the Regency eras. Their purpose was to defend Britain in case of a French invasion. When Pride and Prejudice was written, Britain was on the verge of war with France and eventually became involved in the Napoleonic Wars, therefore Austen's inclusion of officers in Pride and Prejudice merely accurately reflected the perception of the militia at the time.

Since training lasted only twenty eight days of the year, Lydia's expectation that Colonel Forster would host a ball in Meryton was not unrealistic at all, and given the lack of conflict on British soil combined with widespread respect for the patriotic militia officers, their presence at such social events was probably commonplace. Indeed, in Pride and Prejudice the absence of the militia greatly affected Elizabeth in that "parties abroad were less varied than before; and at home she had a mother and sister whose constant repinings at the dulness of everything around them, threw a real gloom over their domestic circle". Essentially, the absence of soldiers did not affect the safety of the surrounding area of their former camp, but the social life.

Wickham's position as an officer in the militia and a gentlemen allows him to escape from paying his debts for quite awhile, but when Mr. Gardiner and Mr. Bennet must finally research his debts, it is found that he has many "debts of honor"to other officers, and that he was a "gamester". Such debts demonstrate the laxity of the volunteer military atmosphere and the culture of the military regiments, the greater implication being that many militia men are involved in gambling, and that Wickham is one of the few who dishonorably ignore his debts.