Another One Bites the Dust! The dictator of Yemen
is driven out by peaceful protesters after being in power for 30 years!

I believe this pertains to the discussion about peaceful protests being more useful to ending tyranny than weapons.

Note this was peaceful civil disobedience; not armed insurrection, not resisting an armed foreign invasion, and not part of an armed civil war.  ALL of those things are different from each other in fundamental, significant ways.  They are more unlike than like each other.

Congratulations to the long-suffering people of Yemen, and best wishes on forming a new, representative government going forward with their part in the dramatic renewal of their region.  One more tin-plated dictator is added to the refuse pile of history.

From the New York Times: 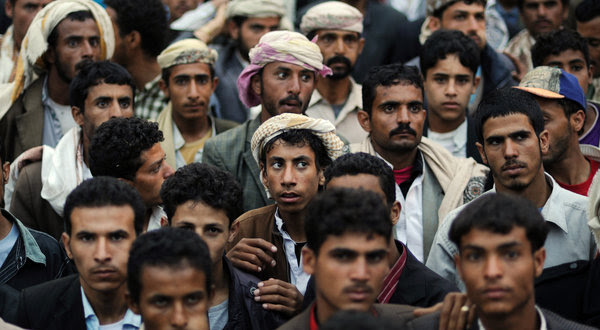 Samuel Aranda for The New York Times
Protesters listened to the news of an agreement on Wednesday for President Ali Abdullah Saleh to transfer power to his vice president. More Photos »

Although the signing was the first time Mr. Saleh actually agreed to give up formal authority, it is unclear how big a political presence he hopes to maintain. A son and three nephews retain powerful posts in the military and intelligence service.
Abdul-Ghani al-Iryani, a Yemeni political analyst and the head of a nonpartisan group that campaigns for democracy, said few people thought the agreement signaled the end of Mr. Saleh’s political ambitions. “He figures the rest of the maneuvering can be kept for after the signing,” Mr. Iryani said.
If he does retain some control, political observers say it is hard to imagine that his chief rivals, Maj. Gen. Ali Mohsin al-Ahmar and the unrelated Ahmar clan, will stand aside. Conflict between government forces and the well-armed supporters of the general and the Ahmars, who lead the country’s most powerful tribal federation, have turned parts of Sana, the capital, into virtual battle zones in recent months.
Mr. Saleh appeared to have been motivated to concede power this time in part because world powers — increasingly frustrated with his intransigence — were threatening sanctions.
Mr. Saidi, the former United Nations ambassador, said Mr. Saleh had been warned that the Security Council would consider freezing his family assets, and that he might be banned from travel and referred to the International Criminal Court.
“He knows what happened to Saddam, he knows what happened to Qaddafi,” Mr. Saidi said. “You cannot play games.”
And Mr. Saleh and his family are believed to have hundreds of millions of dollars in bank accounts and real estate in the United States and Europe. “He was afraid he would lose his fortune,” said a high-ranking Yemeni official who spoke on condition of anonymity because of the sensitivity of the information.
A potential travel ban might have been especially troubling to Mr. Saleh, who may need more treatment for serious wounds sustained in a bomb attack on his presidential palace on June 3.
At the United Nations, Ban Ki-moon, the secretary general, told reporters on Wednesday that Mr. Saleh had informed him in a telephone conversation that he planned to travel to New York for medical treatment after leaving Riyadh.
In Washington, the Obama administration appeared to be ushering Mr. Saleh, once one of America’s closest allies in the region, out the door. “The United States welcomes President Ali Abdullah Saleh’s decision to transfer executive powers immediately to the vice president,” President Obama said in a statement. He said the Yemeni people “deserve the opportunity to determine their own future.”
The administration had initially worried that Mr. Saleh’s departure could harm American counterterrorism operations in the country — the United States works closely with local security forces in its fight against Al Qaeda’s Yemeni branch.
But as the antigovernment protests expanded and it became more evident that Mr. Saleh’s refusal to leave posed a security threat, the Obama administration shifted its position and entered into negotiations to ease the president out of office.
Mr. Saleh’s trip to Riyadh, the Saudi capital, had been rumored for days. It came after several days of intense negotiations between opposition politicians and the president’s representatives, brokered by Jamal Benomar, a United Nations envoy.
At a news conference on Wednesday, Mr. Benomar addressed the young protesters — and seemingly, their criticisms of the negotiated settlement.
“You have generated the momentum for change in Yemen,” he said. “The door is now open for you to make a real difference in the transition.”
Hours later, Mr. Saleh signed the agreement in an ornate room flanked by members of the Saudi royal family, Yemeni opposition politicians and diplomats. He pledged to “cooperate” with the new government and accused adversaries of staging a “coup.”
“I feel sorry for what happened in Yemen,” he said.
With the signing, power shifted to Vice President Abed Rabbo Mansour al-Hadi.
Yassin Saeed Noman, a Socialist politician and the leader of Yemen’s opposition coalition, said that while the agreement would not quickly pull the country from its malaise and had involved painful compromises, the political crisis had required action. “We have to avoid violence in order to keep our country safe,” he said. “The president had been here for 33 years. We want to send him out.”