Gun Smuggling, But Not Where You Think 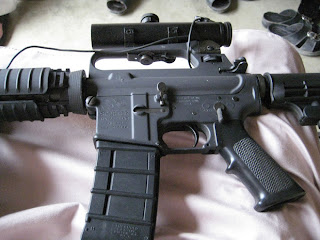 Weapons dealer Abu Wael has traded guns in Lebanon’s Bekaa valley since the last days of his country’s civil war, nearly a quarter of a century ago.
This has been his busiest year ever.
Unrest in neighbouring Syria has sent demand for weapons soaring, doubling prices for Kalashnikov assault rifles and other weapons and helping supply the increasingly well armed insurrection challenging President Bashar al-Assad.
Prices for Kalashnikovs have risen 75% to as much as $2,000 each, while M16s doubled to $2,500, reflecting the surge in demand for arms. The biggest jump was in the price of rocket-propelled grenades, which together with a launcher now cost $2,500 compared with $400 before, when demand was minimal.
“I buy weapons from Lebanese people and sell them to traders who in turn pass them on to Syrian merchants,” said 63-year-old Abu Wael, who declined to give his full name.

Business is booming all over. What do you think?
Posted by Unknown at 7:31 AM