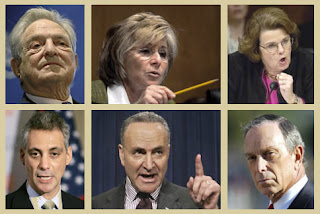 Rabbi Dovid is at it again on the Jews for the Preservation of Firearms Ownership page.

My idea is that non-Jewish gun-rights advocates are sometimes a little bit wacky when it comes to the theory that personal weapons can prevent a tyrannical government from harming you, but when the Jews get going, look out.

In every major genocide of the last one hundred years (including the Holocaust), the victim group was first officially disarmed. Far too often, "gun control" has historically ended in gun confiscation … followed by the hell of genocide.

The equation is simple: A government-gone-bad cannot disarm the citizenry if it does not know who owns the guns.

This nation (along with the rest of the world) is now entering a destabilized economic situation unmatched by anything since the 1930s. Societal upheaval is a prime breeding ground for intolerance and bigotry. Anger and frustration seek easy targets. What group has historically been on the top of the scapegoat list?

From strictly a Jewish point of view, the grotesquely misguided stance of self disarmament among Jews could someday become suicidal for the individual Jew, or G-d forbid, for American Jews as a whole. See: "No Guns For Jews" and "Gun Control: Gateway to Tyranny".

What's your opinion? Is this pure paranoia, or could it be something a bit more contrived? These aren't stupid people, could they be pretending to believe this nonsense in order to justify owning guns, in order to resist any and all gun restrictions? Then, their less gifted brothers take up the chant and pretty soon the whole gun community is talking about resisting government forces with their handguns.

What do you think? Please leave a comment.
Posted by Unknown at 6:54 PM