Even when we give you a rough time, we are thankful for all of you who read or comment here.  I'm  grateful to MikeB for inviting me to join his blog earlier this year, and for the writing of my co-bloggers.  It was a pleasure to be asked, and it is a special pleasure to have Laci and Democommie join after me. (Wow, MikeB, 2011 has been  a BIG expansion year for you!)

So here is a turkey topic post, to go along with the bird on your respective dinner tables --- and all those other side dishes.

Wishing you all a safe and happy Holiday with those you love (but not more of them than you can stand, LOL).

I find Pamela Geller and the Islamaphobes on the right like her to be ignorant and inaccurate.  So I was unimpressed when I heard that Geller was waging an anti-Islam campaign against Butterball Turkeys.  Minnesota is an Ag state; it was a Minnesota Turkey that President Obama pardoned this year.  We take our turkeys seriously in these parts, good 'Merikan turkeys.  Between the wild geese, and the wild turkeys, pheasants, ducks, and other wild fowl around where I live, in addition to the domestic variety, we are practically hip deep in edible birds of all varieties.

Promoting an hysterical fear and hatred for Islam is a significant effort by the right, including covert funding by the big money on the right to keep people good and scared.  It makes Islam and terrorism a good wedge issue for the right manipulators, to frighten their base into voting the way they want them to vote.

Here is one of the initial sources for the story about Geller's ridiculous claims, one that clearly, she didnt do the minimum research to verify before making a big noise.  Given her penchant for doing that, there has to be an element of self-promotion in this, a desire to gain attention for herself, not just a concern for the topic. ( I had a rip-roaring good laugh at any publication that gives Geller credence being called 'The American Thinker', because the people who believe this crap are anything BUT thinkers; they're ignorant, bigoted idiots.):

From the New York Magazine (Geller is based in NY): 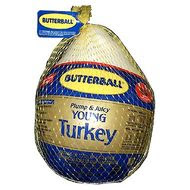 The Internet's most visible hater of Islam, Pamela Geller, is warning all Americans this Thanksgiving about a dastardly new force that's threatening the freedom of our holiday dinner tables: Butterball turkeys. According to Geller, in a column from The American Thinker, the turkey brand is forcing sharia law onto all of us by offering whole turkeys that are "certified halal." Geller is aghast: "In a little-known strike against freedom, yet again, we are being forced into consuming meat slaughtered by means of a torturous method: Islamic slaughter." Yet again!
Geller has the background, in her typically measured tone:

Halal slaughter involves cutting the trachea, the esophagus, and the jugular vein, and letting the blood drain out while saying "Bismillah allahu akbar" — in the name of Allah the greatest. Many people refuse to eat it on religious grounds. Many Christians, Hindus or Sikhs and Jews find it offensive to eat meat slaughtered according to Islamic ritual (although observant Jews are less likely to be exposed to such meat, because they eat kosher).

While Geller attempts to rally the PETA folks to her side by calling the practice crueler than normal, another more neutral take contends that halal slaughter "differs from turkeys which are slaughtered in traditional turkey farms or plants in the United States, where turkeys are kept in cramped conditions and slaughtered in a sort of assembly line by machinery which many find to be inhumane."
Geller will not be convinced otherwise: "It's Islamic supremacism on the march, yet again," she promises. (Yet again!!) "So this Thanksgiving, fight for your freedom." Her "Boycott Butterball Turkey" group on Facebook currently boasts 1,078 "likes," and comments like, "Liberal Fascists are indoctrinated to hate whites, Jews, America, Americans, Free Markets, Christians, history, economics, numbers, and facts." Liberal fascists, however, love Butterball.

Then we have this Youtube bit of Geller and her right wing interviewer spewing this crap over the airwaves; what they are saying is not, in point of fact, correct in any measure:

In counterpoint to the inaccuracies, we have this to enlighten our readers from the dark dysinformation and propaganda on the right.  Screeds of inaccuracy like those typical of Geller and others provokes me to wonder why it is that Geller, and those who run with her crap, like Andrew Breitbart, hate America.  Or in this case, they certainly hate an American Corporation at least, one that employs a LOT of people and does a lot of business here in the U.S., and world wide.

From the Butterball Corporation website, here is the ACCURATE description of their business:

As the most recognized name in turkey, the Butterball brand represents more than 50 years of cherished memories with consumers globally. Our retail, deli, and foodservice products are distributed throughout the United States and in more than 20 countries worldwide. The tradition of providing top-quality, great-tasting products that make meals something to celebrate every day has made our brand an American favorite.

Headquartered in Garner, NC, Butterball is the largest producer of turkey products in the United States. The company’s three-pronged approach to

focuses on self-governance, sustainability, and

social responsibility. The initiative plays a key role in providing internal oversight for integrating values that are important to the company.

and here, from the facts page of Butterball:

and Kudos to the Rachel Maddow show, for fact checking Ms. Geller:

There was a good price for the holidays on Butterball turkeys at our local grocery stores; I may just have to rush out to buy a couple of extras, to keep in the freezer, for other holiday entertaining - and to be a good American, by buying American, in pushback against the bigotry and hatred and just plain bloody-minded chronic inaccuracy of people like Ms. Geller.

I'm thankful that I get so many opportunities to correct the misinformation of conservatives, who would otherwise apparently believe this nonsense, unquestioningly and without critical thinking or factchecking, from the brief glance at the search engine results. ( I think my favorites were the titles indicating that Butterball Turkeys were 'sacrficed to Idols!!!!!!! Oh NOOoooooooooooh!')
But for now, back to the kitchen!