Guns in the Home and Suicide 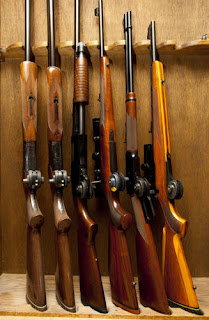 The Star.com reports on something of interest to Americans, or at least it should be.

Suicides. Suicides dropped dramatically in Canada thanks to the federal gun registry. Not only do statistics prove as much, it stands to reason that with improved gun safety comes decreased gun fatalities; with fewer tools-of-choice for suicides available, fewer suicides occur. It just makes sense.
Here are the stats. A home where there are firearms is five times more likely to be the scene of a suicide than a home without a gun: Canada Safety Council. The Institut national de sante publique du Québec has assessed that the coming into force of the Firearms Act is associated, on average, with a reduction of 250 suicides (and 50 homicides) each year in Canada. That’s nearly one life saved per day. StatsCan figures are stark: firearm suicides have dropped 48 per cent since the enactment of the very law that the Conservatives seek to repeal.

In The States it's not quite as high as 75%, but the majority of gun deaths here are suicides as well. Do you think that fact is overlooked in gun control discussions? Whenever it does come up the pro-gun crowd comes up with one of their three standard responses. I think they must memorize these inanities.

What's your opinion? Are suicide rates even a greater reason for strict gun control laws than the traditional gun violence?

My belief, and I'm not alone, is that in most cases suicide is a permanent solution to a temporary problem.  One study interviewed survivors of gun suicide attempts. Every one interviewed expressed gratitude to have failed. The absense of gun availability, as proven by the Canadian experience, ensures fewer suicides.

What's your opinion?  Please leave a comment.
Posted by Unknown at 9:57 AM