Military Promises to Expedite Handover of Power in Egypt

The Times, they are a changin', to borrow a Bob Dylan lyric.  I'm betting this will result in a noticeable speed up in the military letting go of power.

From the old Gray Lady, aka the New York Times: 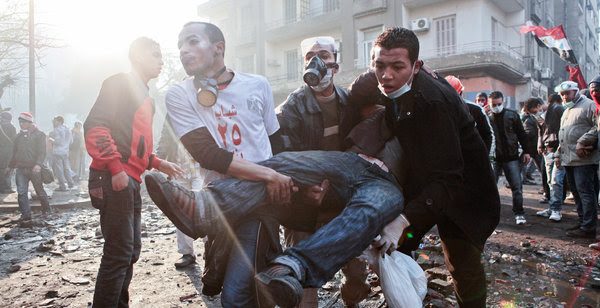 Moises Saman for The New York Times
A wounded man was carried away from clashes in Cairo on Tuesday. More Photos »

CAIRO — The ruling military council agreed on Tuesday to speed up the transition to civilian rule in a deal made with Islamist groups but which seemed unlikely to satisfy the demands of liberal parties and the more than 100,000 protesters who gathered in the center of the capital to demand an immediate transfer of power.

More Photos »
The agreement came after the ruling Supreme Council of the Armed Forces met with representatives of the Muslim Brotherhood and other Islamist groups in a session that was boycotted by most other political parties. The deal called for a new constitution and a presidential election no later than next June, as well as a new civilian cabinet to be led by a technocrat prime minister rather than a politician.
Under the agreement, the first round of elections for a national assembly would go ahead as scheduled on Monday, a major goal of the Brotherhood, which stands to win a large share of the seats. But it would also leave the civilian government reporting to the military — effectively a continuation of what amounts to martial law in civilian clothes — until next June.
Shortly after the Muslim Brotherhood and other Islamist parties emerged from talks with the military to announce a deal for the generals’ full exit from power in June, the military’s top officer, Field Marshall Mohamed Hussein Tantawi, gave a televised in which he declared that the army did not seek power.
“The armed forces, represented in its Supreme Council, do not covet power and they put the country’s best interest above all other considerations,” he said. “The armed forces are ready to give up power immediately if the people wanted that through a national referendum if it was necessary.”
The protesters in Tahrir Square in central Cairo jeered and booed the speech. On Tuesday they continued to battle with the police in nearby streets for the fourth straight day, braving an increasingly lethal crackdown in what seemed to be a leaderless expression of rage.
With the police crackdown galvanizing popular anger at the military council, not least of the problems with the deal announced Tuesday was whether any credible civilian leader would take the job of prime minister if the government remained subordinate to the military.
“No one is going to accept another civilian government micromanaged” by the military commanders, said Hossam Bahgat, executive director of the Egyptian Initiative for Personal Rights.
Referring to the Supreme Council of the Armed Forces by its initials, Islam Lotfy, a onetime leader of the Muslim Brotherhood youth movement, said: “The people will not be happy if the SCAF just give them some painkillers.” Mr. Lotfy was among the instigators of the revolution; he was later expelled from the Brotherhood for starting a more centrist breakaway political party with other young Brothers.
“It may be the solution will be the SCAF delegating responsibilities to a new cabinet with full authority to manage the country,” he said.
The brutal treatment of the protesters prompted the resignation of the first civilian cabinet, which the military council accepted on Tuesday.
Each day since Saturday the crowds have grown at Tahrir Square, the epicenter of Egyptian resistance — first to the former president, Hosni Mubarak, ousted in February and now to the military commanders who replaced him — and the violence has mounted as well.
Intense skirmishes continued on the main avenue leading to the Interior Ministry. Though the security forces could have reached the square from other streets and the protesters could have attacked the Interior Ministry from other directions as well, each side continued to hammer the other — protesters with rocks, the security forces with tear gas that wafted back through the square — along the same charred and pockmarked block.
Many of the protesters wore green face masks, of the type used by medics, to try to filter tear gas fired by security forces in the ebb and flow of the fighting along streets littered with debris. Both sides sought to reinforce makeshift barricades.
A reporter for Al Jazeera held up a spent tear-gas canister to a camera and said its markings said it was manufactured in the United States. But the words were not easily legible to viewers.

(Page 2 of 2)
By midday, the crowd in Tahrir Square had swelled to many tens of thousands — far larger than at the same time on previous days. A new banner across the center of the square declared, “This land is owned by the Egyptian people.” Tents and a field clinic to treat injured protesters were being set up nearby.

The fighting on Tuesday came as criticism of the military spread beyond Egypt’s borders. In a statement, Amnesty International said the ruling commanders had “been responsible for a catalog of abuses which in some cases exceeds the record of Hosni Mubarak.”
The military had been seen as the linchpin of the political transition after the enforced departure of Mr. Mubarak.
It was the institution Islamists hoped would steer the country to early elections that they were poised to dominate. Liberals regarded it as a hedge against Islamist power. And the Obama administration considered it a partner that it hoped would help secure American interests.
But the violent crackdown and the resignation of the civilian cabinet were blows to the tenuous legitimacy of the ruling military council.
Reeling from the swift collapse of the military’s authority, the Muslim Brotherhood, Egypt’s largest Islamist group, urged protesters to show restraint or risk delaying the elections.
Many activists, though, were talking about renewed signs of divisions inside the Muslim Brotherhood.
Reopening a split that emerged at the start of the revolution in January, many of the younger members of the group were said to be coming to the square in defiance of their elders’ orders to stay home in order to avoid upsetting the elections.
“Just like in January, I think the older leaders of the Muslim Brotherhood will eventually follow as well,” said Mr. Bahgat of the Personal Rights Initiative.
Referring to the same quandary, Mr. Lotfy, the onetime leader of the Brotherhood youth, said young Brotherhood followers “will have to take our own decision between what the organization wants and what our conscience tells us to do.”
But other Islamists, some more conservative and others more moderate, joined secular parties in calling for the protest Tuesday to demand that the military hand power to a civilian authority.
In the report by Amnesty International, drawn up before the paroxysm of violence began in Cairo and other cities on Saturday, Philip Luther, an Amnesty official, said military rulers had “continued the tradition of repressive rule” which the anti-Mubarak protests had sought to end.
“Those who have challenged or criticized the military council — like demonstrators, journalists, bloggers, striking workers — have been ruthlessly suppressed, in an attempt at silencing their voices,” he said. Mr. Luther said the human rights “balance sheet” of the military rulers showed that “the aims and aspirations” of the anti-Mubarak protests had been crushed.
“The brutal and heavy-handed response to protests in the last few days bears all the hallmarks of the Mubarak era,” he said.
Victoria Nuland, a spokeswoman for the State Department, called the violence “deplorable” and urged that elections take place on schedule.
The Health Ministry said at least 23 people had died in the four days of violent clashes, and several doctors treating patients at a field clinic and nearby hospital said several had been killed by live ammunition, contrary to denials by the Interior Ministry. More than 1,500 people have been seriously injured in the clashes, the Health Ministry said. Two more people died in protest at Ismailiyah on the Suez Canal on Monday, news reports said.
Though all the political leaders called for elections to begin on schedule next week, a growing number acknowledged privately that the violence was likely to force their delay — potentially adding to the unrest. And even as the political leaders unified around the demands, new divisions emerged among them over how the military might begin to hand over power.
Some liberal groups, led by the former diplomat and presidential candidate Mohamed ElBaradei, called for the military council to give up power immediately to a civilian “government of national rescue.” Other liberals said they sought only the replacement of the current cabinet with a new civilian team with more power to make decisions independently of the council.
Mr. Hamzawy, the founder of a new liberal party and a parliamentary candidate well positioned for a seat from an upscale district of Cairo, said in another Twitter message that he still favored holding elections before picking a new national unity government that would continue to govern under the military council, but called for replacing the current prime minister, Essam Sharaf.
“I’m still convinced that elections are the way to transfer power and I changed my position along with others to demand Sharaf’s dismissal after yesterday’s statement,” he said.
In the square, some protesters worried about who might succeed the military council and its leader, Field Marshal Mohamed Hussein Tantawi, even as they chanted for his ouster.
“People don’t want military rule, and they won’t leave here until the field marshal goes too,” said Omar Tareq, 18, a university student from the province of Qalyoubeya. “But I don’t really know what happens if he does. Who will take hold of the country?”