One of the gunloon's favorite falsehood is to pretend the UK is a bloody deathzone because the Brits have sensible gun regulations.  When asked to back up their nonsense, gunloons will point to articles from the UK's Daily Mail.  Here the Daily Mail claims the UK is far more violent than South Africa and the US.  Another Daily Mail article asserts the UK is more crime-ridden than the Balkans.

Gunloon prof, Eugene Volokh, cites the Daily Mail to repeat another favored gunloon meme--that the UK has outlawed self-defense. Per Volokh and the Daily Mail:
Residents in Surrey and Kent villages have been ordered by police to remove wire mesh from their windows as burglars could be injured....

Locals had reinforced their windows with wire mesh after a series of shed thefts but were told by community police officers that the wire was ‘dangerous’ and could lead to criminals claiming compensation if they ‘hurt themselves’....

As I've sagely noted, on many occasions, the Daily Mail isn't the most reliable of sources.  This is no exception. 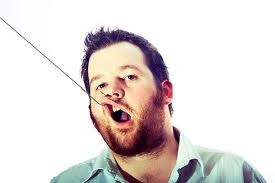 But it turns out that the Surrey police don’t actually have a problem with wire mesh. On their web site they advise home owners to "Use a window lock on opening windows and a strong grille or heavy wire mesh." When I emailed them to ask about the news story they told me that wire mesh should be fitted on the inside of the window so that burglars can’t remove it.
While wire mesh gets the thumbs up from police, there are some things they don’t recommend. For example, they generally advise homeowners not to use razor wire or broken glass because they could be sued if someone injured themselves — even if that person was injured while committing a burglary.

What people fail to understand is that every country has its tabloids--we have the National Enquirer and the World Weekly News.  The UK has the Daily Mail.

Just another case of gunloons not having credible resources to back up their foolishness.
Posted by Jadegold at 2:23 AM