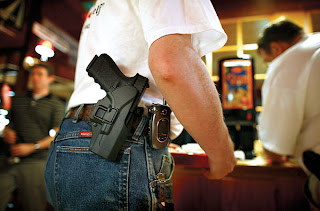 Sunday afternoon John Garcia and his family were having lunch at Garcia’s Restaurant. Mr. Garcia was open carrying a handgun inside the restaurant. A man now known to be Mr. Christopher Torres, who has an alleged history of “mental issues” walked in to the store.
Mr. Torres observed the firearm on Mr. Garcia’s hip, then announced he was a DEA (Drug Enforcement) Agent, and stated he had evidence that Mr. Garcia was going to rob the restaurant.
Mr. Torres then attacked Mr. Garcia, hitting him and trying to remove the firearm from the holster. The firearm fell to the floor where an uninvolved party picked it up and placed it in the manager’s office.
Other customers restrained mr. Torres until Albuquerque Police Arrived.
Mr. Torres was arrested for “several felony charges”, and was taken to the hospital for treatment.
Mr. Garcia (Victim) was also arrested as he took his firearm into a licensed liquor establishment which is a felony in New Mexico.

It certainly wasn't Mr. Garcia's fault if Mr. Torres attacked him for nothing. And, shouldn't the concept of Constitutional Carry over-ride any silly laws about exactly where you can take your gun? (/sarcasm)