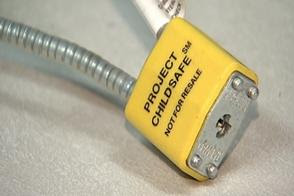 “When you have children, when you have firearms in the house, I think you just need to exercise common sense,” said Knox County Sheriff David Barber.

Many sheriff's offices, including the Knox County Sheriff’s Office offer cable-type gun locks for free to anyone who wants them.

Johnstown police Lt. Josh Boudinot said they can also be found in almost every gun store for $5 to $10.

While Boudinot said that's the best way to keep a gun from accidentally firing, something as simple as a zip-tie will also do the job.

“Basically, all you do is just run it up through the magazine well, out the top, loop it through there, and there you go,” said Lt. Boudinot, demonstrating how to secure a handgun.

He said the zip-tie prevents someone from putting a magazine or ammunition into the gun.
“It's not as good as a gun lock of course, but it's something.  Something's better than nothing," he said.

Now, let me guess. I know the contentious, never-give-an-inch gun guys will have a problem with this.  What could it be?

I know, it'll take too long to bring the gun into use in case of need. Removing the lock or the zip-tie is just too time consuming when you've got rapists and murderers kicking in the front door.

Is that a valid argument?  Let's see.  If half the accidental shooting deaths are kids getting ahold of daddy's gun, that would be about 300 lives saved. That's if everyone used gun locks. Do you think 300 lives would be lost due to the couple-second delay required to make the gun available in case of an emergency?

No, I don't think even our most argumentative gun-rights friends would say that.

So, we're all agreed.  Let's make proper gun storage mandatory.  If a kid gets hurt with a gun that was not properly secured, the gun owner is held responsible, minimum punishment is loss of gun rights.  Fair enough?

What's your opinion?  Please leave a comment.
Posted by Unknown at 8:32 AM