Gun Rental Suicide at the Range in California 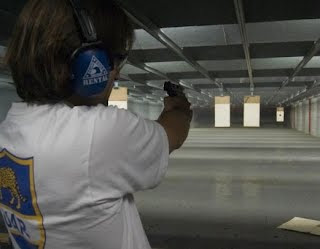 A little before 1:30 p.m., other shooters at the firing range saw Wells fall to the ground. He was discovered dead from a single gunshot to the head. Police called to the scene said a suicide note was found in Wells’ pocket. The case is being ruled a suicide, Adams said.

What's your opinion? Is the easy rental of handguns contributing to this problem? Should there be better screening before allowing someone to use a rental gun?

Do you think this was one of those "determined" suicides?  He wrote a note, went to the range, rented a gun and then blew his brains out.  It would be hard to deter a guy like that, wouldn't it?

But most suicides aren't committed by such determined individuals.  Evan at gun ranges, when someone goes there depressed and angry in order to do the deed, they aren't entirely committed.

They could be swayed. Easy gun rentals do matter in cases like that.

What's your opinion?  Please leave a comment.
Posted by Unknown at 8:35 AM