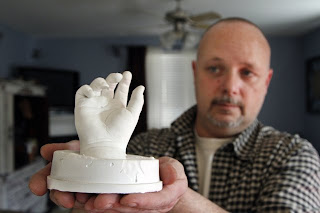 A former Clark County sheriff's deputy on Thursday filed a wrongful termination lawsuit against the county. Ed Owens alleges he was fired for questioning the safety of gun safes issued by the sheriff's office after his 3-year-old son got into a safe and accidentally shot himself.

Owens was fired Nov. 29, 2011, over violations relating to the accidental fatal shooting of his 3-year-old son, Ryan.

Owens is now seeking reinstatement to the sheriff's office and monetary compensation for lost wages and damage to his reputation.

He claims the safe was defective and his bosses should have warned him. That's how the 3-year-old was able to access the gun.

What's your opinion?  Does that sound plausible to you?

Please leave a comment.
Posted by Unknown at 8:51 AM