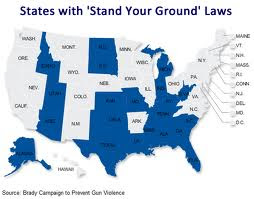 Most stand-your-ground laws grant a person who uses deadly force the presumption that he acted reasonably unless there is evidence to the contrary.

If there are no witnesses and the victim is dead, or if the evidence is conflicting, the chances are greater that someone can "get away with murder," Savannah Law School professor Elizabeth Megale.

Avoiding the incident should be a requirement. If you fail to take simple steps to avoid the confrontation, you shouldn't be able to claim self-defense later.

What do you think?  Please leave a comment.
Posted by Unknown at 8:54 AM