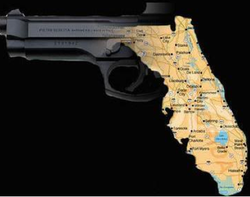 Generally, when it comes to gun control, the poll shows 51 percent oppose stricter laws and 45 percent favor them. A narrower segment of the electorate, 49 percent, say Tampa should be allowed to temporarily ban guns during the RNC convention while 46 favor the idea. Voters from the Tampa Bay region are the most-inclined to favor the temporary RNC ban.

Maybe Florida's not so bad after all. For The Most Baneful State in the Country, those poll numbers don't seem so bad.

What do you think? Please leave a comment.
Posted by Unknown at 9:27 AM