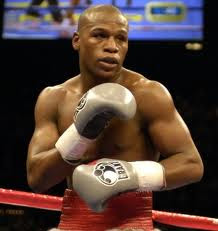 Boxer Floyd Mayweather Jr. is about begin a three-month jail sentence in Las Vegas in a domestic violence case.


The case stems from a hair-pulling, arm-twisting attack on the mother of three of his children in September 2010.

Mayweather pleaded guilty last December to reduced charges in the altercation with Josie Harris while their two sons watched.

Domestic abusers, who plea bargain their offense down, like Floyd Mayweather did, often retain their right to own guns.  Depending on the State, there are many violent and dangerous people who can still own and use guns legally.

What's your opinion?  Please leave a comment.
Posted by Unknown at 5:58 AM