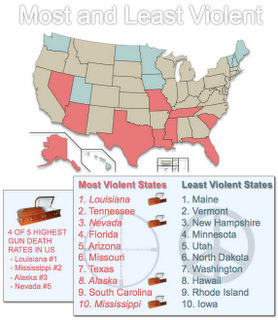 Okay, so, there's a new study out that listed the most violent and least violent states in the US. The study by the Institute for Economics and Peace assessed factors such as number of homicides and violent crimes, the incarceration rate, the number of police, and the availability of small arms. The study  also concluded the following:

"The 2012 United States Peace Index (USPI) has found that  the U.S. is more peaceful now than at any other time over the last twenty years."

Okay, that's great news! According to its authors, the study "is the only statistical analysis of crime, and the cost of crime, in all 50 states," including the 61 most populous metropolitan areas, and concluded the following:
Fascinating information, what kind of connections can you draw from this?

Please leave a comment
Posted by Unknown at 11:11 AM