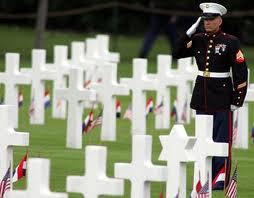 On Common Gunsense, japete wrote a beautiful Memorial Day tribute, with this conclusion:


Because I write a blog about gun violence prevention, I want to talk about America gun deaths as they compare to deaths of Americans because of war. More people have lost their lives to bullets on the streets and in the homes of American communities than American military members serving since the Viet Nam war:

Between 1955 and 1975, the Vietnam War killed over 58,000 American soldiers – less than the number of civilians killed with guns in the U.S. in an average two-year period.4

In the first seven years of the U.S.-Iraq War, over 4,400 American soldiers were killed. Almost as many civilians are killed with guns in the U.S., however, every seven weeks.5