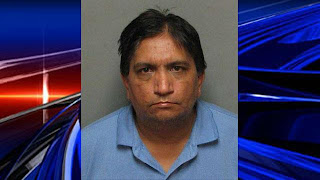 A Lodi storekeeper was arrested on Tuesday after shooting a man suspected of stealing beer from his shop.

Gurminder "Gary" Parmar shot 21-year-old Christopher Driggers in the upper shoulder area between his neck and shoulder after Driggers allegedly stole the beer.

Police were notified of the shooting around 9:49 p.m. by a customer who claimed they saw Driggers flee the shop on foot after the shooting. Officers responded to the scene and soon located Driggers and the beer.

Following an ensuing investigation of the incident, Parmar was arrested and charged with Assault with a Deadly Weapon.

In California they know how to sniff out those fake DGUs. Of course it helps when the victim is still alive.  This incident has a little bit of that vigilante flavor to it, don't you think?  It's got that typical attitude of righteous gun owners towards criminals, even petty ones.

An interesting thing about this story is the look of the shopkeeper.  If you listen to our gun-rights friends you wouldn't think a guy like that could own a gun legally.  According to them, you have to be rich and famous, or at least white.

What's your opinion?  Please leave a comment.
Posted by Unknown at 6:16 AM