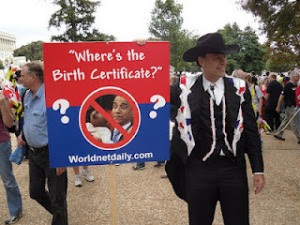 via The Propaganda Professor

Like an interplanetary blob that keeps managing to resurrect itself for B-movie sequel after B-movie sequel no matter what the heroes do to squelch it, birtherism just will not die. Birthers absolutely live to hate President Obama; and unwilling or unable to challenge him cogently on the issues, they instead resort to ad hominem attacks and the malicious rumor mill:  he's a "socialist" and/ or a NAZI who "pals around with terrorists" and "can't speak without a teleprompter"; he's the most secretive and power-mad and corrupt president in history; and furthermore, he ain't even Amurrcan. (But of course it has nothing to do with racism, so don't you even suggest such a thing.) And proving them wrong only encourages them.


What's your opinion? Is there any other explanation for this nonsense other than racism= Please leave a comment.
Posted by Unknown at 12:19 PM