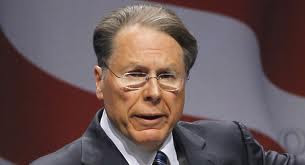 In an April 25 op-ed for the Daily Caller, National Rifle Association CEO and Executive Vice President Wayne LaPierre took to the opinion pages to once again deploy faulty logic to claim that the reelection of President Barack Obama will precipitate an "all-out war on the Second Amendment."

LaPierre's primary piece of evidence concerning what he calls "the web of lies spun about the president's phony, claimed support of the Second Amendment," is that current Chicago mayor and former White House chief of staff Rahm Emanuel has been "tapped as the star co-chair for Obama's re-election effort." LaPierre claims that this is "no honorary job" but rather "real power linking Obama's re-election with Emanual's fanaticism for destroying the Second Amendment." But if Emanuel wanted to work with Obama to push gun bans nationwide he most certainly missed his best chance, which would have occurred when he worked in the highest levels of the Obama Administration.

What's your opinion? Is Wayne lying through his teeth or is he completely paranoid? I don't see a third choice. Do you?

Please leave a comment.
Posted by Unknown at 9:13 AM