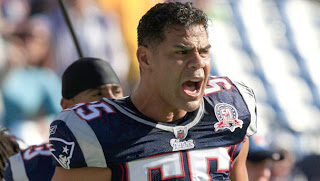 Police are investigating the shooting at the Oceanside, Calif., residence of the former New England Patriot and San Diego Chargers football star as a suicide. Police confirmed that Seau was found by his girlfriend at his beachfront home with a gunshot wound to his chest.

People who attempt suicide are often temporarily insane. The lethality of a gun makes it more likely that they'll succeed. It's sad.

What do you think? Please leave a comment.
Posted by Unknown at 9:26 AM