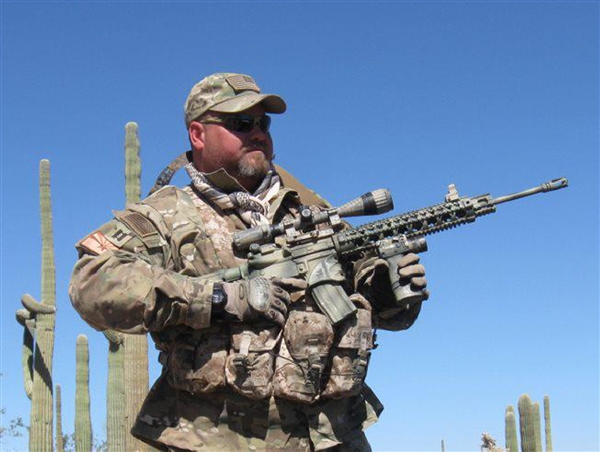 Would this be a good time to point out the inherent problems with the lax gun laws of Arizona? I think so. I can't wait to learn his permit status, if any.

This creep could easily be the poster child for NRA gun nuts - the individuals who are obsessed with firearms, obsessed with finding someone to shoot, obsessed with threats lurking around every corner about to getcha (because you're so appealing/good looking/rich/ important/ sexy - if only in your own mind). That would be as distinct from the sane individuals who don't feel a need or desire to go armed everywhere, who aren't afraid of imminent home invasion, who don't wet themselves over improbable heroic fantasies involving their fetish objects, and who practice sound, sane gun safety for normal firearm activities like skeet shooting or hunting where a firearm is a tool in an activity, but not an essential fetish prop to a person's core identity.
J. T. Ready, who mostly personifies the National Rifle Association demographic of an old looking (he's white overweight angry guy with right to extreme right wing leanings, killed himself and four other people in Arizona. Ready was a speaker at Tea Party events, where he was embraced. Ready had also attempted to be part of Occupy events, where his participation was rejected because of his hateful and extremist views.
While many on the right have tried publicly to distance themselves from the anti-immigrant, anti-Semitic, and racist views of the white supremacists, the reality is that the right has courted and embraced them. They have been part of CPAC, the Conservative Political Action Conference, where all four of the then running GOP presidential candidates spoke. Right wing bloggers are featured and presented with awards, including Pamela Geller who shares a number of views that she holds in common with right wing extremist mass murderer Anders Breivik in Norway, demonizing anyone who isn't white, and exclusively culturally western European. The right wing is concerned about keeping domination in the U.S. for white European-descended people, and desire to keep black, brown, and presumably Asian people in a subordinate relationship.
Here are just a few of the extensive Youtube video collection about the now-late TJ Ready. He and his colleagues are far more damning than I could be about them. For those of you who don't readily recognize him in some of these clips, recalled right wing majority leader Russell Pearce was a close buddy of Pearce, including having converted him to Mormonism, and then catapulted Ready right to an important status position in the church. For those not familiar with the acronym, ADL is the Anti-Defamation League.

I could point out these guys are ignorant extremist red-necked- red-state racist, bigoted assholes, but that would be redundant.
If this piques your curiosity, wikipedia has an entry on him. This is from that entry:

He also served as president of the Mesa Community College Republican Party Club and as a precinct committeeman for the Maricopa County Republicans. In 2006, he sought a seat on the city counsel for Mesa, Arizona. He put forth as his motto that "The Purity of the Aryan Race is the most precious resource Nature has to offer All of Humankind."[2]

As the Brits would say, Ready seems to have fancied himself a superior human being. I don't see that in any aspect of him. I would worry that might offend his surviving family and friends, but he appears to have shot them all.
I would not have thought this guy had anything whatsoever to do with a college edumacation; maybe he just presided over the college Republicans, but wasn't actually a student himself. We're talking Arizona after all. Republicans, Tea Partiers, Neo-Nazis; gun nuts all, they deserve each other, but the rest of us don't.
Posted by Laci The Dog at 3:55 PM