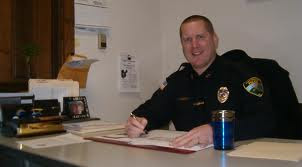 An upstate New York police chief is recovering after accidentally shooting himself in the hand while cleaning a handgun.

Fort Edward Chief Walt Sandford tells the Glens Falls Post-Star the accident happened Friday while he was working on the 9mm pistol at his home in the Washington County town of Whitehall.

He was taking it apart and didn’t believe there was a round in the chamber when it fired and a bullet passed through his left palm.

He says the accident happened when he was doing something he’s done “thousands of times,” emphasizing the danger of firearms even in experienced hands.

Would someone please explain to me how anyone could ever, EVER forget there's a round in the chamber. Isn't that the first thing you check when handling a semi-automatic pistol?

If someone were so unfamiliar with guns that they didn't know the difference between a revolver and a semi-auto, I could understand it.  But, these are people who should know better.

Is it like Greg Camp says, that accidents happen, that we'll all human and that I'm expecting too much of gun owners?  I don't think so.

I repeat, one strike you're out.  If you "forget there's one in the chamber" and have a negligent discharge, you lose your right to own guns, period.  If that policy were strictly applied, would the world be a safer place or not?