I would like to encourage our readers, especially those who comment, to be very careful that they are not 'sock puppets', people who do not in fact hold any original ideas, but who mouth the words that others provide to them, and who hold ideas that are full of holes and fluff.

For example, I thoroughly doubt that our commenter read up on democide (to the extremely limited extent he has read at all) but rather it would appear he was directed to these ideas by the voices in his head that derive from the gun nut echo chamber of pseudo scholarship.

Where legitimate ideas and concepts exist, they are twisted and contorted like a rubber Rubik's cubes until the original legitimate concept has had this done to it, trying to hammer it to fit the pro-gunner's preconceptions. so they can cherry pick a small piece out of the debris context to support a failed argument:
OR, their understanding of the concept someone minimally smarter told them supported their argument is so poor, so distorted, so surreal and intellectually dishonest that it resembles this image more than an actual three dimensional object Rubik's cube: 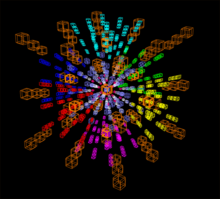 A word to readers and commenters; it is not sufficient to have read a book once, or part of a book, or to have come across a single web site on the interwebs.  To understand information and concepts, you need a solid existing intellectual structure that is a solid framework to which it can be added.  That pre-existing framework is clearly lacking along with the required building blocks of logic and critical thinking.  A crumbling hole filled "rube's cube" of ignorance (as distinct from the brilliant Rubik's cube) is insufficient.

After watching his clip of Sam and the Truth Snake, but especially in response to his previous post on sock puppets, I'm tempted to add these images as little design feature widgets on this blog. 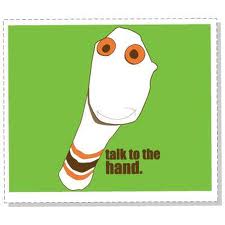