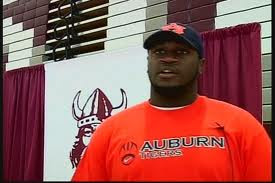 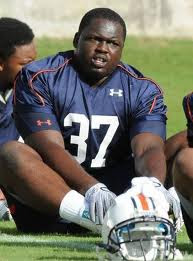 
Investigators were searching Sunday for a gunman who killed three people — including two former Auburn University football players — and wounded three others at a pool party near campus after several men got in a fight over a woman, authorities and witnesses said.

One of the wounded was shot in the head and critically hurt. Another was a current player, Eric Mack.  Desmonte Leonard opened fire at the Saturday night party at an apartment complex near the university, Auburn Police Chief Tommy Dawson said. Federal marshals and police were searching for Leonard, who faces three counts of capital murder.

Police emphasized that the shootings didn't appear to have anything to do with some of the victims being former or current players on the university's powerhouse football team, which won the national championship in 2010.

"The only connection that the Auburn football team has to this is they are victims of a brutal shooting. Sometimes the young men get a bad rap, I feel like, but they are the victims today," Dawson said.

It's hard to tell how much the victims had to do with escalating the situation, or if they were responsible for starting it.

One thing for sure is, young men carrying guns at parties is the direct result of lax or non-existent gun laws and the terrible proliferation of handguns in the country.

Something should be done about that.

What do you think?  Please leave a comment.
Posted by Unknown at 6:59 AM