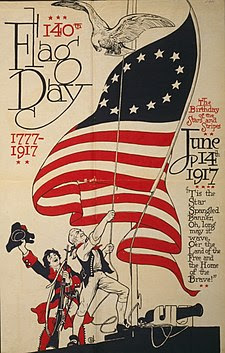 Here is the beautifully brief wording:

The Flag Act of 1777 was passed by the Second Continental Congress on June 14, 1777, in response to a petition made by an American Indian nation on June 3 for "an American Flag."[1] (As a result, June 14 is now celebrated as Flag Day in the United States.) It reads, in its entirety: "Resolved, That the flag of the United States be made of thirteen stripes, alternate red and white; that the union be thirteen stars, white in a blue field, representing a new Constellation." (See Journals of the Continental Congress, 1774 – 1789, 8:464.)

So, you would think that settled the design of our national flag, except that the concept of a national flag as we know it now didn't really exist in the 18th century; it was a later development.
Credit should go to both Wikipedia for some of these images, and to an excellent site, Flag Timeline  of USHistory.org for many of the others.
What the Flag Act resulted in were a number of designs which conformed to that brief wording, including but not only the Betsy Ross flag - although the Betsy Ross flag eventually won the greater recognition.  Here are some of those flags used at the time:
The Second Continental Congress started out meeting in Philadephia, but then later in the year moved around Pennsylvania to other locations, including Lancaster and York. The national flag came into existence two years to the day of the official establishment of the Continental Army in 1775.
However there WAS a flag that was flown as early as 1775 by our newly formed Navy, referred to as the Continental Colors.  It differed from the East India Flag ONLY in the proportions of the Canton.
Wikipedia has a full entry on it for those who have a greater curiosity, but here is an excerpt:

In the first year of the American War for Independence, the Continental Congress authorized the creation of a navy. A new flag was required representing the Congress and fledgling nation, and distinguishing from the Red Ensign flying from British vessels.

It is not known for certain when, or by whom, the Continental Colors' design was created, though the flag could easily be produced by adding white stripes to the previous British Red Ensigns.[3] The Alfred flag has been credited to Margaret Manny.[4]

And here is a short bio on Margaret Manny, who is less well known than Betsy Ross.


Margaret Manny was a milliner in colonial Philadelphia who made flags for the United States during the American Revolution.

Manny began making jacks and ensigns for ships as early as December 1774.[1] She also made the Grand Union Flag, or Continental Colors, first flown by John Paul Jones aboard the Alfred on 3 December 1775.

My thanks to our co-blogger Laci for calling my attention to rich history of the East India Company flag, which preceded our own flag by a full seventy years, as a very British and a very corporate flag, first used in Asia. The East India Company flag stripes were somewhat 'variable' in number, ranging from nine to fifteen which mirrored our own experimentation with stripe numbers. The symbol in the upper left corner, the 'Canton' also changed over time, representing changes in the UK. We didn't pioneer that pattern of alteration to reflect growth and change either.


But the adaptation of the flag of the East India Company, while strikingly similar is not the only theory for the design adopted by the Continental Congress.

Another theory is based on the family coat of arms of Richard Amerike:

"According to the American Flag Research Center in Massachusetts the heraldic origin of the American flag is not positively known; archives in the British Library confirm that the Stars and Stripes was the coat of arms of the Ap Merike family – and that they pre-date Washington's connection with the continent by 300 years".[64]

The coat of Arms belonging to the family of George Washington has three stars in chief (at the top) on a white field, with two red horizontal stripes across the middle of the escutcheon, underneath it.  The Amerke basis for the flag is generally considered 'revisionist history'.  Clearly neither coat of arms are as similar as the East India Company flag design, but both provide some insight into the heraldic tradition that was the foundation for flag design.
From Wikipedia:


In any case, both the stripes (barry) and the stars (mullets) have precedents in classical heraldry. Mullets were comparatively rare in early modern heraldry, but an example of mullets representing territorial divisions predating the US flag are those in the coat of arms of Valais of 1618, where seven mullets stood for seven districts.

The thirteen original colonies were the basis for thirteen stripes and the thirteen original stars on the first official U.S. flag, but in the Flag Act of  1794, that was temporarily expanded to fifteen stripes and stars with the admission of the first two new states.  Had that pattern continued, our flag would now have 50 stripes along with the 50 stars.  It is a fascinating insight into how the flag has changed, but also into how the nation under George Washington thought about our national expansion at the time.  It wasn't until the Flag Act of 1818 that the stripes were codified as representing the original 13 colonies, with the stars changing --  with such changeovers always mandated to occur on July 4th -- to represent the number of states at any time in our nation with only the stars.
Here is the order of the states joining, representing each of those stars, because of course there was no official membership or ratification until AFTER the sessions of the Continental Congress:
Delaware (December 7, 1787), Pennsylvania (December 12,
1787), New Jersey (December 18, 1787), Georgia (January 2, 1788), Connecticut
(January 9, 1788), Massachusetts (February 6, 1788), Maryland (April 28, 1788),
South Carolina (May 23, 1788), New Hampshire (June 21, 1788), Virginia (June 25,
1788), New York (July 26, 1788), North Carolina (November 21, 1789), and Rhode
Island (May 29, 1790) (source - Flag Timeline)
This is a singularly striking image from th 1880s that shows some of the various permutations of our flag over the years, from an old textbook (courtesy of wikipedia): 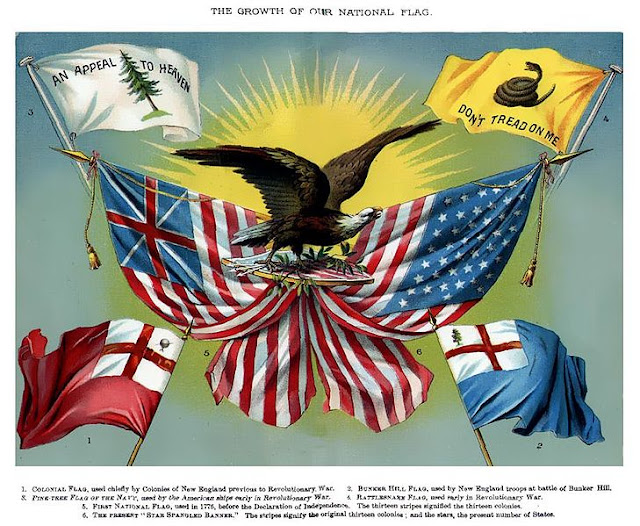