The Battle of the Somme (for Crunchy)

Note all the soldiers have rifles.

But also note, that there are mines and artillery shells. The First World War also used gas.


The Second World War saw even deadlier bombs and the introduction of German Vergeltungswaffe (retaliation weapon). In particular, the V-2 Rocket. The picture below shows the aftermath of a V2 attack in West London, 1944 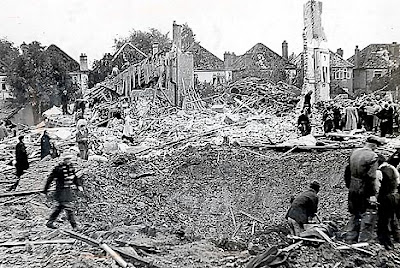 A firearm was useless against the aerial bombardments that were seen in the war zones of the Second World War and subsequent conflicts.

“this list of alleged genocides is a pitifully weak argument against gun control, simply because most of the victims listed here did fight back. In fact, if there’s a real lesson to be learned from this roster of oppressions, it’s that sometimes a heavily armed and determined opposition is just swept up and crushed — guns or no guns.“

In more simple terms, which crunchy might be able to understand: Guns do fuck all to stop genocides caused by superiorly armed foes.
Posted by Laci The Dog at 12:43 PM