Let's really make it a licence to kill.

OK, here's my position on using self-defence as a justification for murder:

"A defendant is entitled to use reasonable force to protect himself, others for whom he is responsible and his property. It must be reasonable."

Opinions differ on what constitutes reasonable force but, in all cases, the defendant does not have the right to determine what constitutes "reasonable force" because the defendant would always maintain they acted reasonably and thus would never be guilty. The jury, as ordinary members of the community, must decide the amount of force reasonable in the circumstances of each case. It is relevant that the defendant was under pressure from imminent attack and may not have had time to make entirely rational decisions, so the test must balance the objective standard of a reasonable person by attributing some of the subjective knowledge of the defendant, including what they believed about the circumstances, even if mistaken. However, even allowing for mistakes made in a crisis, the amount of force must be proportionate and reasonable given the value of the interests being protected and the harm likely to be caused by use of force.

In other words, you are gonna be judged by twelve if you aren't gonna be carried by six--you should be taken to trial where the legal system can determine if you are guilty or not guilty and not given a pass.

It makes no sense to give a blanket pass to someone so that they can use deadly force.

And it seems that these laws may be developing moth holes in their blanket of protection according to this story:

In a rare “scoop” for an editorial cartoonist today, Matt Bors skewered a little-known National Rifle Association (NRA) program that offers insurance to cover policy holders’ costs should they become embroiled in a legal battle after shooting someone in self-defense.
The insurance — technically endorsed by the NRA and administered by Lockton Affinity exclusively for NRA members — is available as a rider to the “excess personal liability” plan. Here’s how the website advertises the added coverage for self-defense (emphasis in the original):


What’s Covered:
• Provides coverage up to the limit selected for criminal and civil defense costs.
• Cost of civil suit defense is provided in addition to the limit of liability for bodily injury and property damage.
• Criminal Defense Reimbursement is provided for alleged criminal actions involving self-defense when you are acquitted of such criminal charges or the charges are dropped.

The basic liability plan costs either $47 or $67 annually, for coverage up to $100,000 or $250,000, respectively. Though the coverage amounts stay the same, a policy holder can add the self-defense insurance by paying $118 or $165 for the lesser coverage, or between $187 and $254 for the larger plan. (The discrepancies are due to the different prices for coverage on two different webpages from the insurer.)
The NRA pushed its members in 2005 to support Florida’s controversial “stand your ground” law — an exemption from arrest or prosecution in shootings where the police think the act was in self defense. When the law got bad press after police let the man who shot and killed Florida teenager Trayvon Martin go free, the NRA refused to back down, continuing to support the law’s passage in other states (amid other acts of insensitivity around Martin’s shooting death). 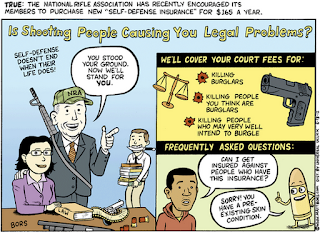 Given that "pro-Gun" policies tend to result in more criminals and other disqualified persons having guns, and people misusing guns, it only seems logical to me that the "pro-Gun" side would offer such "anti-life" legislation.