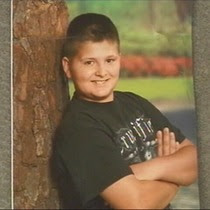 An 11-year-old boy, Devin Grady, died Sunday morning at Huntsville Hospital's pediatric unit where he had been since being shot on May 23rd.

Morgan County Sheriff Ana Franklin says he was accidentally shot by an 11-year-old friend with a .410 gauge shotgun.

Franklin says Devin and his friend were playing behind the friend's home on Union Hill Road and had the shotgun with them in case they saw a snake.

Devin was a 5th-grader at Union Hill School.

Where were the parents? Who owned the gun? Why were 11-year-olds allowed to have unsupervised access to a shotgun?

Is this part of the Neanderthal-Alabama thinking about learnin' the young 'uns 'bout guns?

Even the most ignorant and uneducated gun owners give their kids some kind of training about gun safety.  How much proof do we need that it doesn't work?  Nothing can replace adult supervision, and the lack of it should be criminal.

What's your opinion?  Please leave a comment-
Posted by Unknown at 7:18 AM