Woman Shoots Herself in the Leg, through her purse...........without a gun

I don't know how it is possible for a woman to NOT KNOW she has live rounds of ammunition bouncing around loose in her purse.

And I would bet that this woman was unaware that bullets could be dangerous outside of a gun, short of doing something really stupid to intentionally fire them without a gun.

If there was ever an occasion to remind us that guns don't kill or wound people, it's the  BULLETS fired from them that do -- this would be it.  More precisely stupidity and other negative qualities, assisted by guns, are usually required for bullets to kill and wound people.

This woman found a shortcut.

By Eric Pfeiffer | The Sideshow – 5 hrs ago 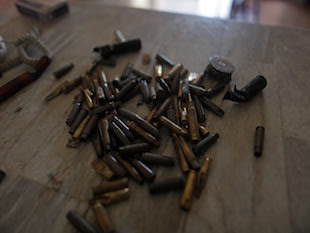 A bullet mysteriously exploded inside a woman's purse (Dario Lopez-Mills/AP)A Pennsylvania woman was shot in the leg while shopping at a local department store on Tuesday. But in a nearly unbelievable twist, no gun was involved. Apparently, the woman was carrying the bullet in her purse, when it mysteriously exploded.
"She did not have a gun in her purse or on her," Montoursville Deputy Police Chief Jason Bentley told the Williamsport Sun-Gazette. Bentley said the woman, whose name has not been released to the public, "was not aware" she was carrying two or three bullets inside her purse at the time of the accident.
The 56-year-old woman was taken to a local hospital and was eventually discharged. In fact, the woman initially declined medical treatment, only heading to the Williamsport Regional Medical Center after her son reportedly encouraged her to do so.
"Something must of hit the primer of one of the bullets," Bentley said. "The bullet stayed in the purse, but its casing put a hole in the purse and caused a minor leg wound."

Bullets exploding outside of a gun are a rare occurrence but are not entirely unprecedented. In March, a bullet being used as evidence in a court case exploded in a bag and shot 20 feet across a courtroom. No one was hurt in the incident. It was surmised that the bullet exploded after its tip bounced against another bullet tip in the same evidence bag, according to the Telegram & Gazette.
Posted by dog gone at 7:28 AM